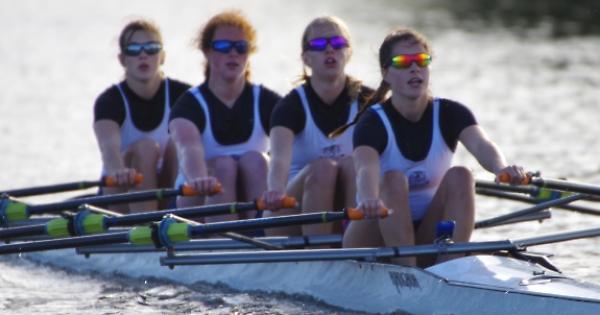 Upper Thames and Henley triumph in the fall

The Upper Thames Autumn Head took place on Sunday on the 3km course upstream from Henley Management College to the finish in front of Phyllis Court where more than 350 crews were split into two divisions.

With strong winds with gusts of over 30 km / h, the organizing committee was considering canceling the event but luckily the rain and gusts stopped just before the start of the race under the watchful eye of the experienced team of commissioners and referees. Host club Upper Thames and Henley Rowing Clubs recorded nine wins each. Upper Thames, which had 23 crews in the race, had two senior men eight and three women quads entered in Division 1, as well as a male master and female master eight crew.

The Upper Thames senior men’s team, due to illness and injury, were without three athletes from last year’s best crew. However, starting at number one, Upper Thames A weathered significant challenges from the Leander Club and the University of Bristol to win their group event one eight. The crew of Sam Dierens, Kingsley McDiarmid, Matt Swiss, Tom Hole, Henry Pearson, Gareth Syphas, Rob Leech and Tom Foster rowed cleanly in tough conditions with coxswain Bea Searle leading the perfect line near Berkshire Bank.

Crew B eight raced in group two and had to make some last minute crew changes and had a respectable time but couldn’t beat the University of Bristol’s second boat.

Then comes the turn of the three senior women’s quads. Crew A was the fastest women’s quad of the day, winning the first group, beating the Marlow and University of Reading crews by more than 20 seconds. The crew of Courtney Edmonds, Lucy Ryan, Sian Hinton and Meghann Jackson had a great scull and the hard training last month proved to be in good condition. Crew C, who raced in group two, repeated their success by beating crews from the University of Reading and the University of Bristol to win their event by 15 seconds. The crew of Tijssen Teuntje, Beth Arscott, Isobel Pullinger and Ella Wandless also secured a narrow victory against their B crew of Daisy Hampton, Penny Hamand, Naomi Holland and Yasmin Ryman-King.

In the afternoon division, the Upper Thames men’s team split into fours and sculls.

The Upper Thames Scratch A crew of Gareth Syphas, Matt Swiss, Tom Foster and Rob Leech notched a narrow victory of just 0.4 seconds over Marlow to claim the victory in the coxless open four.

Running in group one with coxswain of four, the Upper Thames crew of Kingsley McDiarmid, Henry Pearson, Tom Hole, Sam Diserens helmed by Zoe Thomas were only 11 seconds behind the Upper Thames coxless four. Thames but finished second behind a strong Marlow crew.

In the open-ended doubles, the crew of Lachlan Reid and David George set a quick time but found themselves without any competition after the other crew in the event was eliminated.

The senior women’s team ran a figure eight in the afternoon division. Upper Thames A raced in group one, finishing third behind two crews from the University of Oxford’s Women’s Boat Club.

Upper Thames B won group two eight by more than 25 seconds, beating the Oxford City and London teams. The crew of Emma Lister, Claudia Adams, Mary Bryant-Jeans, Ella Wandless, Sophie Lane, Penny Hamand, Beth Arscott, Isobel Pullinger and coxswain Harriet Aubrey had only made one outing together the day before the race .

In the Combined CDE Masters event where a handicap time based on the age of the crew is applied as the two Upper Thames crews clashed along the island, forcing both crews to stop rowing . Unfortunately, this gave the victory to a Masters E crew from Broaxbourne.

There were no such problems in the Masters CD four-pair event where the Upper Thames crew of Adam Rennie, Will Hoodless, Hamish Floyd and Mark Shimmin took a comfortable victory of almost ‘one minute against Marlow, Reading and Henley. The Masters EF coxless pair of Pete Jacobs and Dan Sadler also won their event against Hollingworth Lake.

The Henley Rowing Club had 28 crews entered in 21 events spanning the entire spectrum of club members, from masters to junior girls under 14.

The crew settled in early to a relaxed and lively pace, then gradually moved away from Marlow behind them.

In D18, Finlay Ribbons and Ross Lamont returned to a wetsuit they had raced in when they were members of the Peterborough City Rowing Club, before moving to the Henley area. The duo rediscovered the success of their initial partnership by winning this event by 10 seconds on a field of six crews. Pascal Giret, Roman Meredith, Kit Daly and Connor Simpson’s J16 quad showed good technical development to finish second behind a strong crew from the Hinksey Sculling School.

Competing in the senior women’s four-offs, which was one of the biggest entries of the day, juniors Henley Eyla Wild, Evie Tingate, Florence Lenthall, Lucy Jones and coxswain Rose McEwan claimed a five-point victory. seconds out of second place at the University of Southampton. .

One of the most resounding wins of the day came from Tilly MaCartney, Gwennie Hunter, Tabby Hall and Emma Eltze who finished 52 seconds ahead of second place Hinksey Sculling School and 81 seconds ahead of third place Barn Elms RC.

The girls’ J18 coxless four was another double for Henley with just two separating the crews of Natalie Schoenmakers, Laoise O’Donohue, Nonnie Luke and Josie Sawbridge who stayed just ahead of J16s Tilly Macartney, Gwennie Hunter, Tabby Hall and Florence Lenthall who in turn was 47 seconds ahead of third-placed Weybridge RC.

In the afternoon, with slightly better conditions, Jemima Butterworth and Molly Hall won their division by 40 seconds against their teammates Lilian Graham and Chloe Hughes again ahead of Maidenhead, third.

“With hard work, with sacrifice, you can accomplish great things in life”