Politics, protests, provocations and, of course, the pandemic, demanded huge sacrifices from Ukraine’s 45 Winter Olympians – and an act of protest from skeleton racer Vladyslav Heraskevych.

Sacrifice is nothing new for an Olympian.

Just look at all the Olympic-themed TV commercials depicting the sacrifices athletes have had to go through just to compete in the Olympics.

Michael Jordan of the United States was kicked out of his high school basketball team before he became an Olympic champion. Canadian Joanie Roachette won a memorable Olympic bronze medal just days after her mother passed away.

For Ukrainian athletes competing at Beijing 2022, sacrifice takes on a whole new meaning.

With news of an impending military invasion of their country dominating the minds of all Ukrainians in Beijing – as well as a pandemic that has affected nearly 1 in 5 Ukrainian athletes at the Olympics – keeping the focus on the high performance sport has become an Olympic caliber event in its own right.

“The situation [in Ukraine] affects us because we all have family, we all have friends there,” monobob racer Lidiia Hunko told Reuters earlier this week.

“Of course we treat people [including Russian athletes] as separate individuals, but it still leaves a mark.

By overcoming COVID and making a powerful anti-war statement, Heraskevych showed why Visa chose him as one of 12 European athletes to sponsor.

Some athletes have had enough.

Ukraine’s first skeleton racer, Vladyslav Heraskevych, risked his sponsorships with Visa and Peak after racing with a “No War in Ukraine” sign he displayed on TV screens after the race.

“It’s my job. I want world peace,” he told the Kyiv Post in an exclusive post-race interview. “And I want peace in my country. That’s all I can tell you.

When asked by Russian journalists if he was afraid of being punished for a political demonstration, Heraskevych replied:

“Honestly, I am very afraid of war. Like any normal person, I don’t want war. This is my position.

Asked about his relationship with Russian athletes, Heraskevych doubled down.

“I respect them as athletes… But again, there is something more important than our relationships – it is the lives of people who can suffer and who can die because of war. So again – we are against war, we are only for peace. 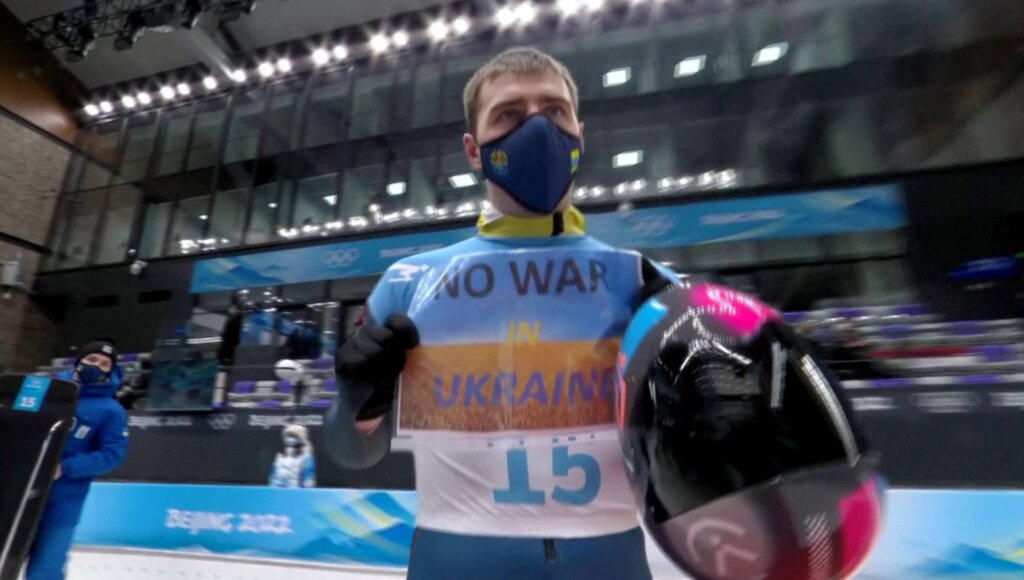 In this screenshot, Heraskevych displays his anti-war message after traveling with the sign on his 3rd and 4th runs at the Yanqing National Sliding Center. (IOC/OBS/Handout via Reuters)

Russian journalists showed no sense of irony as they asked Ukrainian athletes about the sanctions while sporting the hammer and sickle Soviet flag on their backpacks – a political symbol banned from these Olympics.

The IOC issued a statement saying Heraskevych would not be sanctioned, calling his action a “general call for peace”. The IOC has yet to comment on the appearance of the Russian and Soviet flags and colors.

Heraskevych faced the latest set of political questions Ukrainian athletes have faced since arriving in Beijing.

Figure skater Ivan Shmutarko took issue with how the Russian media had twisted his remarks.

“I really didn’t like the way you extracted my words,” he told Russian publication Sport-Express.ru earlier in the week – the same publication that interviewed Heraskevych.

“You wrote ‘Ukrainians don’t speak [Russian]. I didn’t say that… If you have any questions about figure skating or about me, I’m open. If you need me to hype… [I’ll disengage].”

Besides provocative interrogations, Russian journalists are increasingly cited for intimidation or outright provocation.

After the story broke that Russian teenage figure skating phenom Kamila Valieva had tested positive for a banned substance, Russian media reportedly threatened to attack members of the Western press.

According to the British The Guardiana Russian journalist threatened his British counterpart saying “You will be positive when you discover new substances in your tea”, a reference to how Russian dissident Alexander Litvinenko and former Ukrainian President Victor Yushchenko were poisoned.

Another British journalist was surrounded by the Russian press after questioning Valieva about doping, with the threat “Our Russian journalists can tear you to pieces”.

Days before Valieva’s drug test failure came to light, the president of the Ukrainian Sports Journalists Association, Alex Glyvynskyy, was already questioning the bullying tactics used by the Russian press.

“Should Russian athletes now be answered with questions about doping and military aggression from Russia,” he asked on social media.

But politics and provocations are not the only concerns of Ukrainian athletes.

With each passing day, the list of Ukrainian athletes who have been prevented from competing or training grows longer.

A day after Ukraine’s mixed aerials team – one of the country’s top medal hopefuls – was forced to withdraw just hours before the competition, Heraskevych revealed exclusively to the Kyiv Post that he also missed out. training due to a positive COVID test.

“I also had this problem [with COVID], which I have not made public,” he told the Kyiv Post. “Because of that, I missed my first practice, so I raced less than the other guys and yes, that’s a big problem for me.”

The day before, the Ukrainian press was already on its way to the Genting Sports Park in Zhangjiakou to cover the mixed jumping competition when the news of the Ukrainian withdrawal was announced.

Dmytro Kotovsky, Anastasia Novosad and Oleksandr Okipnyuk have become the fifth, sixth and seventh Ukrainian athletes to test positive for COVID at Beijing 2022.

Heraskevych became the eighth – meaning nearly one in five of Ukraine’s 45 athletes at Beijing 2022 missed a competition or practice due to a positive COVID test.

[Note: Ukraine’s figure skating team did compete in the team event, but without a representative in the men’s programme due to Shmutarko’s positive test.]

Given the strict restrictions athletes are subject to, this is an incredible rate that requires further investigation.

All athletes are vaccinated and live in a “closed loop”, which organizers say is for the safety of participants. They are tested every day. Contact with others is severely limited.

“In [mixed aerials]Ukrainian fans were hoping for medals – and rightly so – because during the season our athletes showed consistently high results at prestigious international tournaments,” the Ukrainian National Olympic Committee told the Kyiv Post, referring to the two medals team bronze medal at the World Cup. circuit this season.

“Unfortunately… the Ukrainian team does not have the possibility to field a full team of three freestyle skiers to start the team competition.”

They added that the athletes are currently in isolation and receiving appropriate medical care.

Overcoming anxiety from loved ones back home, political provocations by Russian journalists in Beijing, and dealing with the ever-present worry that a single COVID test could ruin the last four years of training – the sacrifices and achievements of Ukrainian athletes must be rented.

Ukraine may not have a medal yet, but two of its top medal hopefuls – the mixed relay biathlon team and the mixed jumping team – have been forced to withdraw due to COVID.

Yet our athletes provided unforgettable moments.

Their teammates have also had success in men’s biathlon events. Ternopil’s Dmytro Pidruchnyi finished 13and in the 10km sprint, while Artem Pryma from Chernihiv finished just behind him in 15andshowing why the Ukrainian men’s relay team may well be Ukraine’s best hope for a medal at Beijing 2022.

Ukrainian biathletes are not the only ones to be applauded.

Zakarpattia’s Ivan Kovbasnyuk put in one of the finest performances ever by a Ukrainian alpine skier, finishing 14and in the Alpine Combined event. Only Mykola Skryabin did better by finishing 12and during the 1998 Nagano race.

But it’s Heraskevych’s sacrifice — both in overcoming a positive COVID test just to compete and in risking sanctions and endorsements to make his anti-war statement — that has been characteristic of the sacrifices Ukraine’s Olympians have had to make. do in Beijing 2022.

Now there’s an idea for an Olympic-themed ad to overcome adversity that Visa could support.

Found a spelling mistake? Let us know – highlight it and press Ctrl+Enter.

Greater collaboration between Turkey and UAE for the benefit of the region: Erdoğan