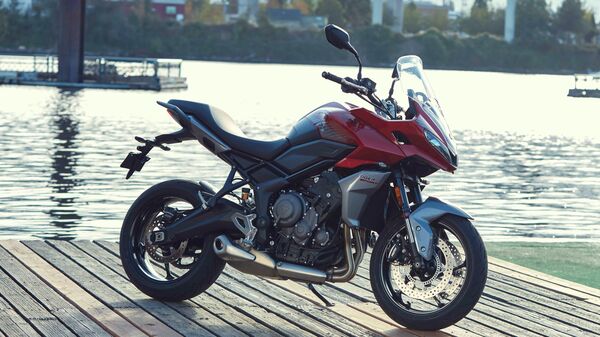 Triumph Tiger Sport 660 will be positioned as an entry level model in the company’s Tiger family.

Triumph Motorcycles India is gearing up to launch the 2022 Tiger Sport 660 in the country on March 29. The motorcycle will be positioned as an entry-level model in the company’s Tiger family. Pre-bookings for the ADV were opened to customers last December for a symbolic amount of ₹50,000.

The bike has already been listed on the company’s Indian website.

Triumph Tiger Sport 660 made its world debut in October last year. It features a distinctive sporty half-fairing with LED headlights as well as a modern-looking Bluetooth-enabled TFT instrument console. It comes with two riding modes – Road and Rain, switchable traction control and ABS. It is based on the Trident model and uses the same main frame. However, the rear subframe is updated for the extra bike load it is designed to carry as an adventure tourer.

The bike can hold 17 liters of fuel, which is three liters more than the Trident model. Internationally, the bike is available in three color choices – Lucerne Blue and Sapphire Black, Korosi Red and Graphite, and a minimalist Graphite and Black option. All three colors are also expected to be offered in India.

The ADV features a non-adjustable 41mm USD fork and a preload-adjustable shock with a remote preload adjuster.

Mechanically, the upcoming Triumph Tiger Sport 660 will be powered by a 660cc three-cylinder engine which has been carried over from the Trident. The engine is designed to produce the same 81 hp and 64 Nm of torque. The engine is mated to a six-speed gearbox and an optional quick up/down shifter.

When launched here, the Triumph Tiger Sport 660 will lock horns with the likes of Kawasaki Versys 650 and Suzuki V-Storm 650 XT.