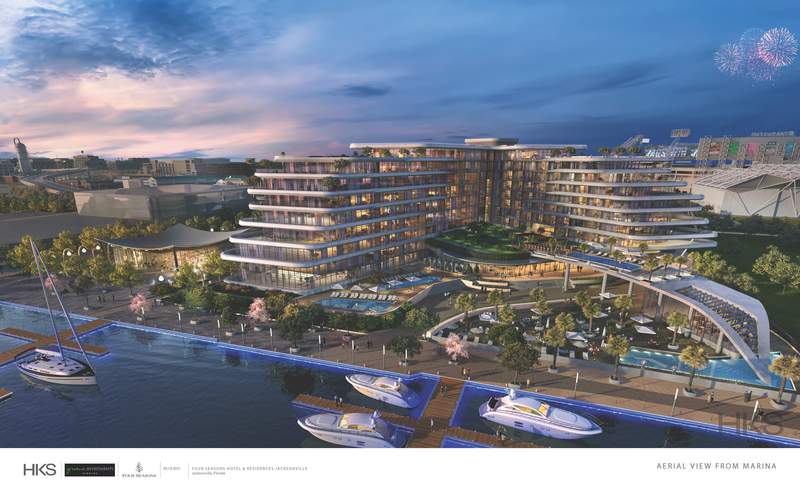 The proposal would bring a Four Seasons hotel to the downtown shores of the St. Johns River. There are also plans for a football performance center next to TIAA Bank Field, an office building, a sports medicine complex and other improvements to the city-owned marina.

The Four Seasons Hotel and Residences, with 176 rooms and 25 residential units, would open in early 2025, if plans are approved.

In a statement (full at the end of the article) released Monday afternoon, Khan and his development firm Iguana Investments said the cost would exceed $ 300 million for the hotel and office building. He said the city’s only initial cost would be to move the fire museum, fire station and docks near Metro Park, which could cost around $ 20 million. The city would end up paying more upon completion of the project with grants and tax subsidies totaling over $ 114 million.

â€œIn short, the project will produce benefits that will exceed the expenses incurred by the City. This is good news for all of us, now and in the future, â€writes Khan.

Jaguars President Mark Lamping led the conversation at a community meeting Monday night on The Shipyards project and wanted people to have their questions answered.

Community members expressed their praise and concerns, one of which was the occupation of the municipal park space by buildings.

â€œI have concerns about the location of the hotel on the park property,â€ said one person.

Lamping explained, “In addition to the 14 acres of park space, this creates a park of equal or larger size.”

People were happy with this response.

“They’re going to support whatever the city decides to do with Metro Park so far, and what they’re trying to do is not break that, so that’s good,” JJ Hammond said. â€œOne way to make Jacksonville a destination, not a hub, is to support these projects. “

â€œWe like the way the Jaguars reacted to some of the mistakes they made with Lot J, and they’re holding the community meetings and they’re doing more listening,â€ said Powell.

The Downtown Investment Authority has been working with Khan on developing a plan and plans to review a draft on Friday at a committee meeting. The whole council would then deal with it in July before going to city council for final approval.

â€œOn behalf of Iguana Investments, I am extremely grateful to the staff of the Downtown Investment Authority for their diligence and collaboration throughout our negotiations, which resulted in a proposed list of conditions presented to the committee on Friday afternoon. real estate disposition of the DIA. We are proud of the hard work by both parties to achieve this recommendation, which we believe will provide exceptional value to the City of Jacksonville throughout the life of the project.

â€œPrivate investment will exceed $ 300 million for the Four Seasons hotel and the nearby condominiums and office building, with Iguana Investments responsible for almost all upfront cash expenses and any cost overruns. The City’s only initial cash costs will be limited to the relocation of the fire museum, marine fire station and wharf to facilitate this new development. The balance of the City’s contributions to the project would occur upon completion of the project in the form of payment for improvements to City-owned assets (the marina, marina service building and lawn for the event), a completion grant and a REV grant that be paid from taxes that would not be generated without the project.

â€œIn short, the project will produce benefits that will exceed the expenses incurred by the City. This is good news for all of us, now and in the future.

â€œIn addition to our proposal that generates a return on investment for taxpayers, it will also allow for much-needed improvements to existing community assets, such as the marina and the city-owned metropolitan park, all complemented by the relocation of 10 acres of park space. from Kids Kampus to an area near Hogan’s Creek and Catherine Street. As a result, downtown Jacksonville will benefit from an unprecedented amount of urban park space highlighted by three times as many linear feet along our spectacular and scenic shoreline.

â€œWe are encouraged and appreciate the support we have received since announcing our plans last month. Although we know there is still work to be done, it is encouraging to see that we are far from the only ones who believe in the promise of our downtown area and in the positive and immediate impact that this project. can have on our friends and neighbors in our area. Downtown Jacksonville must be a business, living, entertainment and leisure destination for visitors from around the world, as well as for those who naturally consider it an honor to call Jacksonville their home.

â€œTo that end, we hope that this mod sheet, which was inspired by input from citizens and city officials, will gain committee approval and be presented to the DIA Board of Directors for final approval on next month. In the meantime, we will continue to listen, learn and communicate. Above all, I am personally committed to doing everything possible to serve our community, be responsive and make you proud.