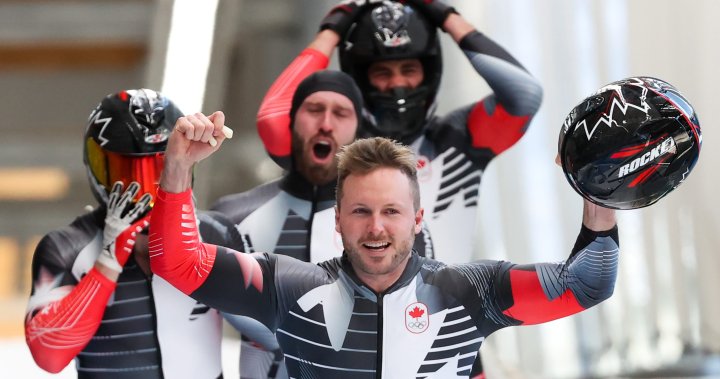 Justin Kripps had no lofty dreams of stepping onto the Olympic medal podium when he first rode a bobsled 16 years ago.

“I just wanted to get as good as possible,” Kripps said. “It was really just the journey, the challenge of becoming the best you can be at something. And that led to so many things.

Kripps’ illustrious career took him to Olympic gold in the two-man with Alex Kopacz in 2018, then bronze in the four-man at the Beijing Olympics in February, with Ryan Sommer, Cam Stones and Benjamin Coakwell.

So when Kripps recently pondered his future after ticking more boxes than he ever imagined, he decided it was time to move on.

The 35-year-old from Summerland, B.C. announced his retirement Thursday, along with Sommer and Stones.

“I felt like I accomplished more than I expected, and I kind of realized that now that I’ve won the medal at four, and I’ve done it with this team where we stayed four years, and it was such a Cinderella story, and then having a gold medal in the two-man, it was kind of like, where would the motivation come from to work as hard as I should for another four years?” Kripps said in a phone interview.

“I want to put that energy somewhere else.”

Kripps, who said he spent most of Thursday reminiscing by reading posts and comments about his retirement on social media, also has two world championship silver and three bronze medals.

Security, he said. had also become a concern after a few crashes last season. The fear of permanent damage was hard to shake.

“You realize as you get older that the sport is a bit dangerous,” Kripps said.

“I remember years ago one of my driver coaches said to me, ‘You’ll know when it’s time to retire, because you’ll think less about how to get down the track the most. quickly and you will think more about getting home safely.’ I kind of had those thoughts this year.

“I thought about it a bit. I’ve had a very long career, and I’ve come through it pretty much unscathed and accomplished a lot. And it looks like the perfect exit point.

Kripps was slow to let the dust settle after the Olympics before making up his mind.

“Obviously a lot of emotions go into (the Olympics), and it’s not the best time to make big decisions in life,” he said.

Kripps & Co. won bronze in Beijing in thrilling fashion, going into the fourth and final run with a 0.08-second lead over the fourth-placed Germans.

Kripps said he would miss those moments shared with his crew the most.

“Definitely competing with my teammates, just having that common goal and going to those races, fighting with the Germans for the podium, just that feeling of accomplishment and accomplishment with your friends and teammates when you do well,” he said. he declared.

Sommer, a 28-year-old man from White Rock, British Columbia, took up bobsledding after a ‘random challenge’ to attend a recruiting camp while battling wildfires in northern Alberta.

It “ended with an Olympic medal and a lifetime of memories,” he posted on Instagram, saying competing for Canada was something he had dreamed of since watching the Olympics on TV. when he was a child.

“Celebrating the highs and dealing with the lows, along with my teammates, are some of the things I will miss the most as I leave this sport,” he wrote.

Stones, a 30-year-old from Oshawa, Ont., wrote on Instagram under a photo of the four-man crew in Beijing: “What a great ending. . . Let’s move on to the next chapter.

“Tschuss! he added, the German word for “goodbye!”

Kripps posted: “I pushed myself further than I thought possible and learned who I was in the process. I wouldn’t even change the worst day or the toughest fight I’ve had because my greatest times seemed to come right after the toughest times.

Kripps said he and his wife Breanne are still planning for their future. They live in Calgary, but his wife’s job — she’s a dancer — has taken them to Vancouver quite often recently.

“I’m exploring different options,” he said. “I really want to consider staying involved in the sport in some capacity.

“I feel like I had such an amazing experience. I would like to pass on the knowledge and experiences that I have gained and try to help the next generation have an experience similar to the one I had .