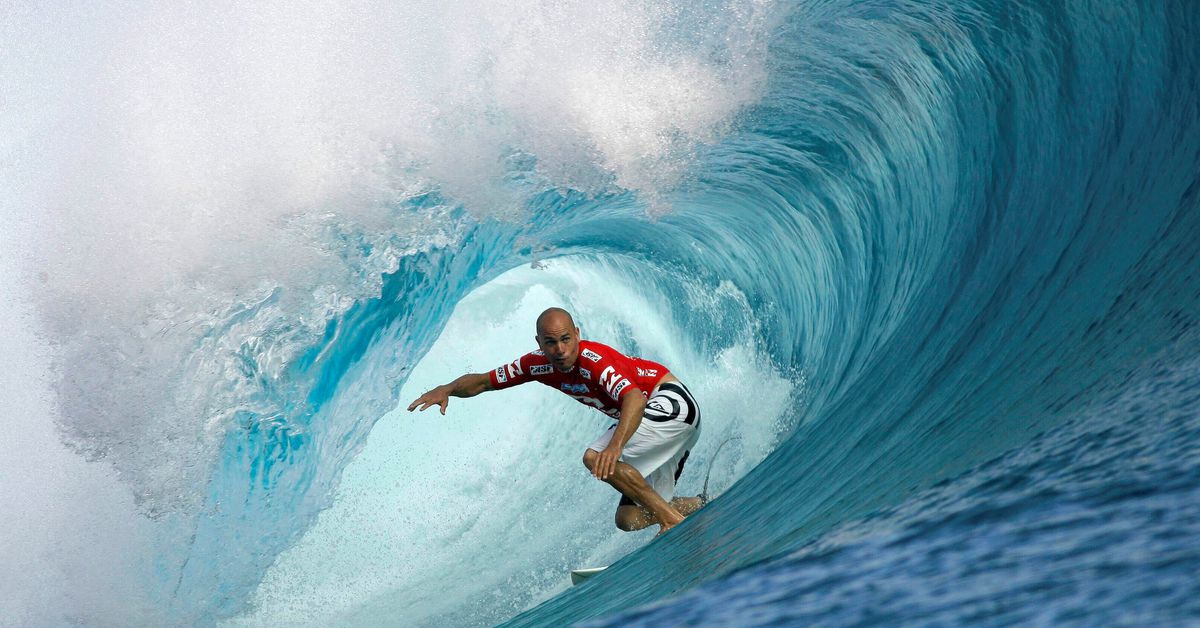 Surfer Kelly Slater of the United States waves during the third round of competition of the Billabong Pro surfing tournament on the legendary reef break in Teahupoo, Tahiti May 14, 2008. REUTERS/Joseba Etxaburu

Feb 5 (Reuters) – Kelly Slater conquered life-threatening waves, the world’s best surfers and her age to win her eighth Pipeline Pro in Hawaii on Saturday, 30 years after first winning the contest.

Six days before his 50th birthday, Slater’s win over Hawaii’s Seth Moniz reignited the debate over whether the Floridian could be the greatest athlete of all time, let alone the greatest surfer of all time.

“Kelly is in his own universe, he’s making history right now,” World Surf League commentator and Momentum Generation friend Ross Williams said during the broadcast of the event. “Speechless, chicken skin everywhere, what a time for sports, not to mention surfing.”

Slater has won 11 world titles, becoming the youngest surfing champion at 20 in 1992 and the oldest at 39 in 2011, and now has a record 56 World Championship Tour victories.

“I’ve dedicated my life to this, you know, all of this. All the heartaches and the wins and all that bullshit,” Slater said, fighting back tears after the final. “I hated a lot of it, but I’m just going to savor it. It’s the best win of my life.”

Slater’s victory in the first event of the 2022 World Championship Tour propels him to the top of the standings, but he has hinted he could retire.

“I don’t know how many more are going to perform. Honestly, maybe that’s it, I might not show up for the (next contest at) Sunset (Beach).”

Slater has been warned by Australian officials that he will not be allowed to attend upcoming events there unless he gets a COVID-19 shot.

Slater, who has not disclosed his vaccination status, defended tennis world number one Novak Djokovic last month after the unvaccinated Serb was arrested and subsequently expelled by authorities ahead of the Australian Open.

Pipeline, the most famous and dangerous wave in the world, was not quite at the same level of ferocious perfection as when the event began. Strong trade winds made the giant peaks more treacherous than usual and forced the final of the first women’s event at Pipeline to be delayed, likely until Sunday.

With less than two minutes left, Slater scored his best wave, falling from the sky, barely avoiding the dipping lip and going deep into the barrel for 9.77 out of 10.

“I thought I was going to break my neck,” Slater later told Moniz on the sand. “I thought I was done, but I just have to try. I barely got up. I got pretty far and it blew my mind.”

Moniz, 24, caught the next massive wave and survived an incredible barrel, but it wasn’t enough and he helped carry a triumphant beach Slater on his shoulders.

“It was an honor to surf against him and a great privilege for me to be out there with him,” Moniz said.

Reporting from Lincoln Feast in Sydney; Editing by Daniel Wallis and Edmund Klamann