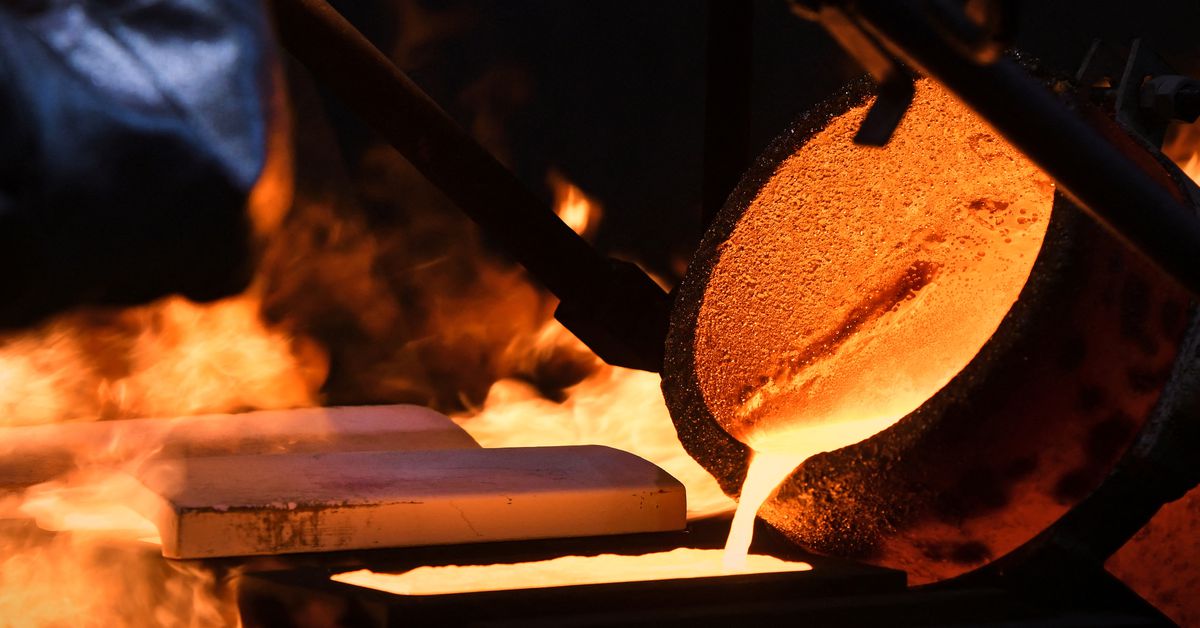 A 99.99 percent pure gold bar is cast at the Krastsvetmet non-ferrous metals plant in the Siberian city of Krasnoyarsk, Russia March 10, 2022. REUTERS/Alexander Manzyuk

Petropavlovsk said it was in preliminary talks with its main lender, sanctioned Russian bank Gazprombank (GZPRI.MM), to restructure its debt after it was unable to make repayments. He was also unable to sell his gold.

The company, whose main investor is Russian billionaire Sergey Sudarikov, said any restructuring of its debt should be done within the limits of the sanctions.

A Petropavlovsk spokesman said it was in talks with Gazprombank and its advisers and it was too early to comment on the way forward.

Meanwhile, Polymetal said some gold projects were facing delays ranging from three months to a year. The company is also cutting some exploration budgets as it faces higher costs after being forced to switch freight service providers.

But demand for gold in Russia has been boosted by local retail investment, he said in a statement.

There has been renewed interest in gold and buying physical gold over the past four weeks in Russia due to the sanctions. The removal of value-added tax this month on purchases of the yellow precious metal has further bolstered demand, a spokesperson added.

Western sanctions against Russian entities in response to its invasion of Ukraine have disrupted several businesses and livelihoods in Russia and pose a challenge to unsanctioned Russian businesses seeking to circumvent new regulations.

Shares of London-listed Polymetal and Petropavlovsk have fallen more than 60% since Russia launched what it called a “special military operation” in Ukraine more than a month ago.

While the two miners faced “contrasting fortunes”, Petropavlovsk appears to be facing an “existential crisis”, said Russ Mold, an analyst at AJ Bell in London.

“A gold producer who can’t sell gold doesn’t seem like a very sustainable proposition. … Having (Sudarikov) as a dominant shareholder probably doesn’t help the company too much in the short term,” Ms. Mold about Petropavlovsk. .

Sudarikov, through his businesses brand REGION, disclosed a stake of just over 29% in the miner earlier this month, according to regulatory filings. REGION is also a shareholder in the sanctioned Credit Bank of Moscow (CBOM.MM), according to data from Refinitiv Eikon.

Shares of Polymetal reversed early gains to fall 7% at 1320 GMT, while those of Petropavlosk fell 21%.

In a positive development for Polymetal, the company said it had resumed gold sales in Russia after shipments were initially hit following the termination of agreements with logistics providers.

He added that the sanctions had not had a significant impact on business, but did not rule out the possibility of sanctions against the company itself, which is partly owned by Russian businessman Alexander Nesis. .

Dine at Jersey Mikes to benefit the 2022 Special Olympics