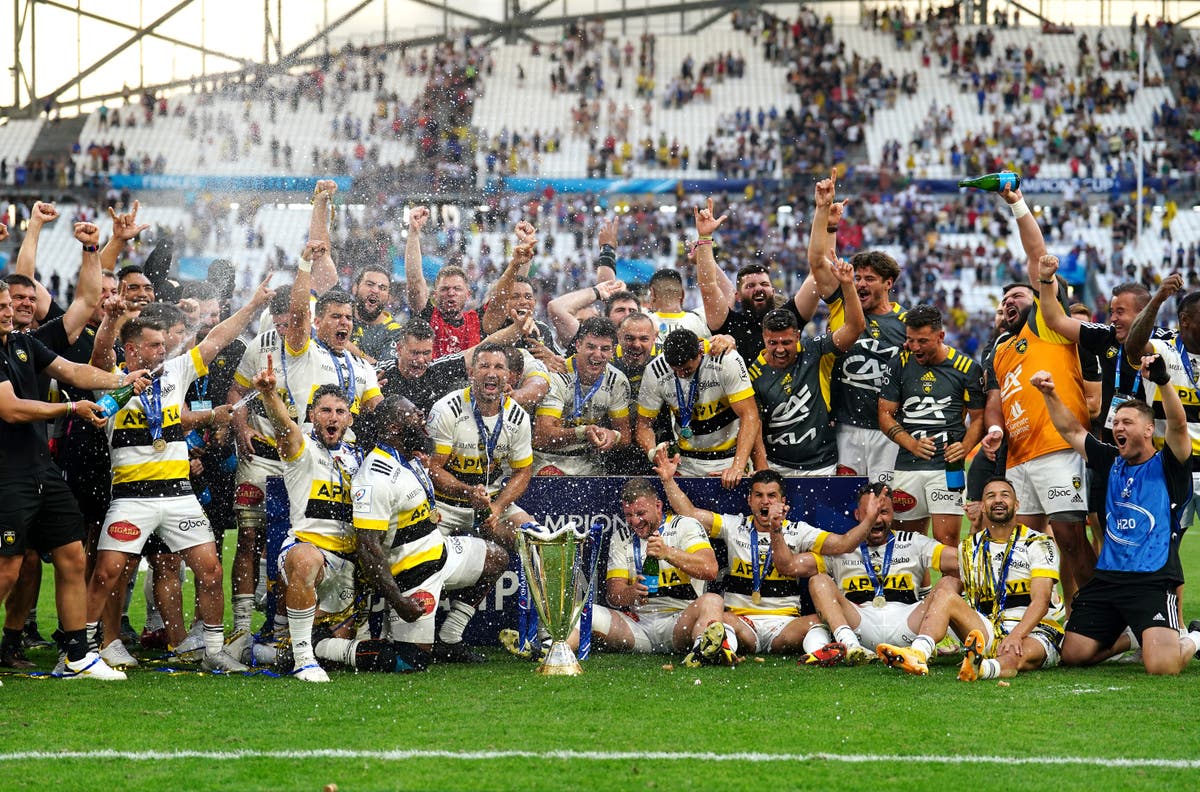 Ronan O’Gara was delighted to lift the trophy as he became only the third person to win the Heineken Champions Cup as a player and head coach after his La Rochelle side beat Leinster 24-21 at Stade Marseille Velodrome.

O’Gara joined his Leinster counterpart Leo Cullen and Toulouse’s Ugo Mola as scrum-half Arthur Retiere smashed his way past a ruck down the Leinster line to score his side’s winner with just 17 seconds left to play.

Leinster, four-time champions, entered the game as heavy favorites and looked set to join Toulouse with a record five wins after Johnny Sexton fired six penalties and substitute Ross Byrne added a seventh to put their side 21-17 ahead with 15 minutes to go. .

But La Rochelle’s third try in the final minute of the Retiere game earned them a first major trophy to make up for their defeat in the European Challenge Cup final in 2019 and the Champions Cup final last season.

“We made a plan and our need was huge. There was nothing in it, but the key was to take space and time away from Leinster,” said O’Gara, who won the title as a player with Munster in 2006 and 2008.

“I told Arthur that I hoped to give him 30 minutes to allow him to continue and win the game.

“There are certain players in football, like Ruud Van Nistleroy, who you know are going to score goals and Arthur Retiere is a brilliant rugby player, but he’s an average number nine and an average winger. That’s a brilliant player without position.

“Leinster are usually out of sight in the first half, so at half-time – when we were five points down – I asked the players ‘what’s the problem? The data shows that we are scoring 60% of our points in the last quarter.

“Twelve months ago we went to Racing and we were beaten 49-0. There was fighting and it was carnage, but it will be carnage in the port of La Rochelle in the days that follow.

“It was such a tense game and everything feels a bit surreal that we will wake up in the morning as European champions.”

Man of the match Will Skelton picked up his second winners’ medal after being in the Saracens side that beat Leinster in the 2019 final at Newcastle.

He had spent four weeks in rehab recovering from a calf injury to be fit for the final and entered the game after 15 minutes of rugby in a month.

“It means everything to this club, the players and to me. We’re just a small town, we’re not supposed to play in these big games,” Skelton said.

“It hurt a lot last year when we were beaten by Toulouse but sometimes you have to lose before you can win the jackpot.

“We showed a lot of character and the way we won it shows how much we care about this club, the city and each other.”

Leinster skipper Johnny Sexton was hoping to lead his side to a record fifth title in their sixth final but had to settle for a second medal.

“I’m pretty lost for words. We didn’t play our best game and we weren’t allowed to play our best,” Sexton admitted.

“We’ll have to take a look at that before we can point fingers. There are a few things at the end of the game that I don’t understand.

“It’s devastating, very fair play in La Rochelle. They came with a plan and I didn’t see them coming back after the lead we had built.

“But we didn’t clear our lines and we paid the price. It’s an incredibly tough competition to win and when you get to the final it’s the toughest game of the season.

“We had chances that we didn’t take and we turned the scoreboard. It was just devastating to lose him like we did at the end.

What to do when a parent is denied a PLUS loan