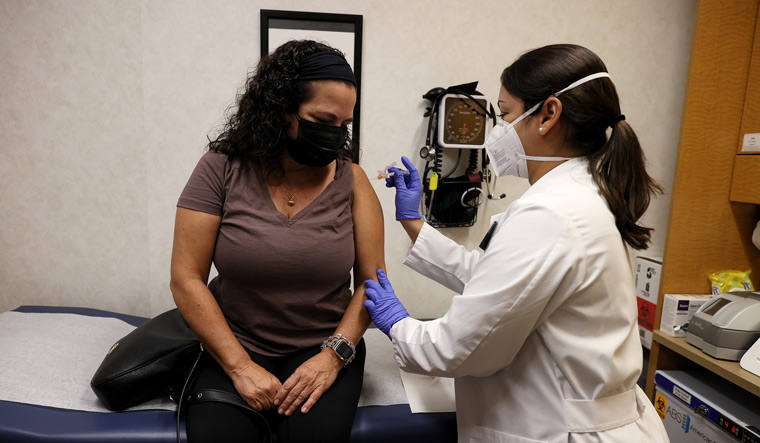 Reluctance to COVID-19 vaccine can be overcome with accessible information

Those opposed to vaccination are not swayed by the numbers or statistics. Of those who refuse to be vaccinated, about 15 percent of the population reject any discussion involving science.

Doctors, journalists and politicians say they are reporting strictly scientific facts that speak for themselves, especially with regard to the effectiveness of vaccines to protect against severe forms of COVID-19. Those who resist the vaccine, however, have a different point of view. For them, science is political.

They believe that these spokespersons have questionable motives and that they present and manipulate the facts to serve their own personal agendas. To understand reluctance or resistance to vaccination, we need to understand how people interpret certain scientific questions, including vaccination.

Let us add that it is important to make this information accessible, both as new knowledge and as an experience shared with the rest of the population.

To do this, as communication researchers, we rely on our knowledge of the social and narrative dimensions of meaning creation. Indeed, well-established research in the field of communications, for example, examining how patients understood cancer information, shows that our understanding is shaped by how we relate to people in the stories we hear. Because identities and the stories that shape them are many and varied, our interpretation of scientific facts can also be diverse. Our understanding can then take on a political dimension and lead to rigid positions.

It’s the experience that counts

According to the theories of meaning-making and narrativity developed by organizational theorist Karl E. Weick and communication theorist Walter R. Fisher, respectively, people first assess facts in light of their own. experiences and those of their loved ones. These experiences are told and exchanged in the form of stories in which people see themselves reflected and with which they identify.

These stories are most effective when they present the listener as having control over their life. For example, for many people, a story in which a family member made a wise choice of medical treatment will be more compelling than a scientific presentation.

When we look at conversations about vaccines on social media, we find that sharing personal stories remains one of the primary ways people form opinions about the reliability and safety of vaccines.

People tell their experiences in the form of stories, so that they can share and compare, but also reassure each other that they are able to make their own decisions.

While most people understand vaccination from personal experience, scientific facts are often reported in statistical form without relating them to the experience of their audience, for example hospitalization rates of COVID-19 patients. These hospitalizations, because they are experienced by others, may not affect those who resist vaccination.

Facts are often presented from the perspective of the scientists who produced them, or representatives of the media or government, so believing them requires trusting these institutions. A loss of confidence can make some people feel like the authorities want to take away their control over their own lives.

This crisis of confidence is partly due to the fact that a majority of people have no direct experience with institutions such as medical research, journalistic investigation or political decision-making. So when stories are presented to those who are reluctant to get vaccinated, it feels like they are expected to let strangers guide them without having a chance to ask questions.

Based on these findings, two recommendations can be made. The first would be to include more non-scientists in scientific research reports so that the public can better understand the issues and feel they are participating in the debate. For example, with the imminent approval of COVID-19 vaccines for children aged five to 11, parents of children who participated in clinical trials of these vaccines could be used to demystify the scientific research process and provide stories. that other parents can relate to.

Or, as the media is doing right now, sharing the stories of relatives of unvaccinated young people who have died from COVID-19 can impact those who are reluctant to get vaccinated. Some people can understand these people’s hesitation about the vaccination: he was worried about the vaccine, yes, but all he wanted to do was see how people would react to make sure it was safe. for him and his family before he encouraged them to get vaccinated.

Likewise, we need to ensure that those who dissect the data in the media have a scientific background and are able to present the numbers in an accessible way. For example, it is possible to compare the number of hospitalizations of vaccinated people to that of unvaccinated people using high school mathematics.

The second recommendation would be to have more public discussions on the kinds of situations that worried people are going through. Those who dare to express doubts today are too quickly excluded from the debate and relegated to the status of outcasts. More examples should be presented of people who overcame their doubts, including the process by which they did so.

Some people who refuse vaccination see themselves as informed citizens or concerned parents. For them, it is an act of resistance that allows them to maintain control over their own life. While it is important to ensure that scientific facts are reported, no one should downplay the importance of these legitimate concerns.

The publication of daily statistics on infections, hospitalizations and deaths is necessary, but will probably not be enough to raise awareness among die-hard vaccine resistant. To convince them, scientific facts must be contextualized and narrated to be understood as part of a human experience.

(The conversation: by Joelle Basque and Nicolas Bencherki, TLUQ University)