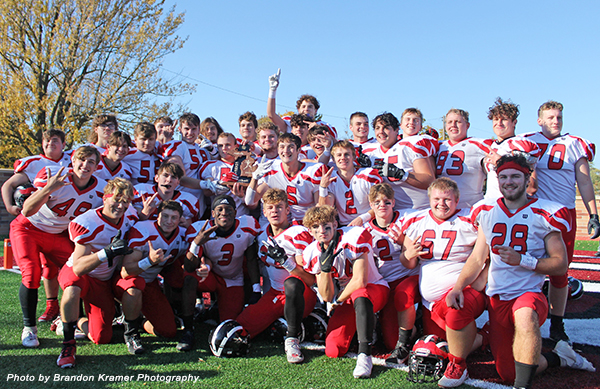 The key story of the year

In a season that has been an emotional roller coaster for soccer players, coaches and fans at Cedar Springs, the team weathered adversity and showed everyone exactly what they’re made of.

The team started well, winning two of their first three games, winning by practical margins against Saginaw Swan Valley and Ottawa Hills, and losing only to powerful Division 1 Rockford. The Red Hawks had just won a record-breaking victory over Ottawa Hills (70-35) and were preparing for the game against Kenowa Hills when they were taken aback by a tragic event: the death of Kevin Martens, assistant football coach and longtime college professor.

â€œKevin was the first coach I hired when I became head coach 9 years ago,â€ said Cedar Springs head coach Gus Kapolka. â€œHis passion for young people and helping them succeed was obvious the first time I met him.

The blow was something that could have derailed the Red Hawks. Instead, it made them play better than ever. The Red Hawks were motivated to win the game. They took the land as if they were on fire. They scored five times, racked over 400 total yards and limited Kenowa Hills to just 48 yards in the 38-0 victory. But the team didn’t stop there.

The Red Hawks went on to play exceptional football, beating Forest Hills Eastern, Middleville Thornapple Kellogg and Wayland. They only lost by one point (41-40) to Division 5 state champion Catholic Central (no other team has scored so many points against them). They became the first Cedar Springs team in history to beat South Christian (38-32) and take second in the OK-Gold behind Catholic Central. They beat Coopersville easily in the pre-district game, and the biggest thrill of all was defeating the Muskegon Big Reds to win the 21-14 District Championship game. Their season ended with a loss to DeWitt in the Regional Championship game.

Among their accomplishments, the team finished with a 9-3 record; be district champions; make it to the state quarter-finals; Coach Kapolka secures his 100th victory; Aiden Brunin kicked an 86-yard punt in the 3rd quarter of the game for Muskegon, which is the 2nd longest punt in MHSAA history and the longest punt ever in a playoff game; lose to Catholic Central by one point; beat both South Christian and Muskegon for the first time; be ranked as having the best team offense in OK Gold by media covering OK Gold; be ranked 7th in Division 3 in the AP and Detroit Free Press final poll; ranked 8e in the final Grand Rapids Press poll; ranked 18 out of the top 50 teams in the state by MLive’s final poll; and the fact that many players voted for the final dream teams and all the state teams. And to top it off, coach Kevin Martens was voted Division 3 Region 1 Assistant Coach of the Year by the Michigan High School Football Coaches Association (MHSFCA).

â€œThis is the toughest team I have ever coached,â€ said head coach Gus Kapolka. â€œThey had to face unimaginable tragedy and grief, but it only served to bring us closer together. I couldn’t be prouder of this group of young men. I am honored to be their coach.

OUR ADVICE: Safe Neighborhoods will benefit everyone in County Warren – The Vicksburg Post