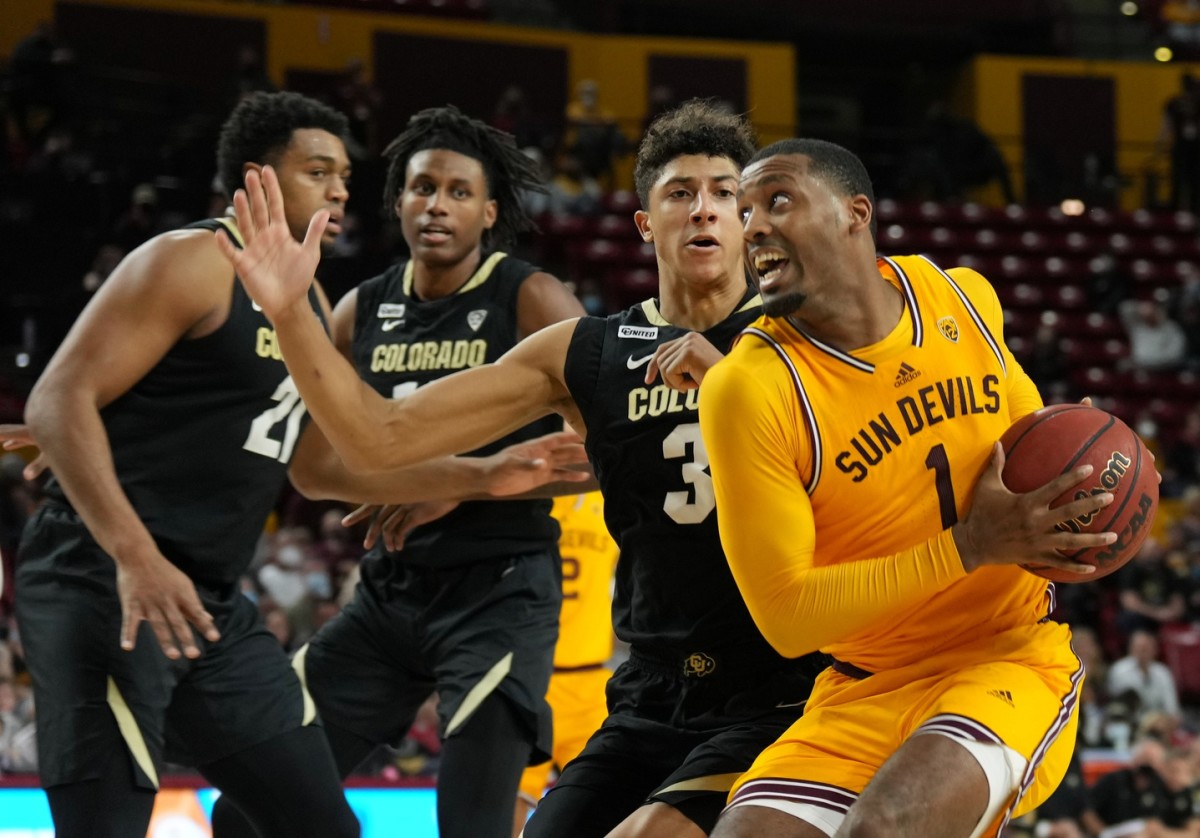 Recap: Sun Devils can’t get over poor second half loss to Colorado

The Arizona State Sun Devils are still looking for their first win in more than a calendar month.

Despite a strong first half, the Sun Devils found themselves losers after the halftime buzzer. Arizona State suffered its third conference loss in a 75-57 loss at the hands of Colorado.

The Sun Devils also suffered their second loss in as many games since December 19.

Arizona State battled and scratched to overcome an early double-digit deficit, but struggled at both ends of the court in the second half. The loss dropped the team to 5-9 (1-3 Pac-12) this season.

Here’s how the action unfolded:

Head coach Bobby Hurley went for size with ASU’s starting roster. Alonzo Gaffney jumped with his tall, thin frame. Another start was Jay Heath, who joined the roster against Cal.

The lack of game action over the past month was evident for the Sun Devils from the opening minutes. Arizona State shot 1 of 7 from the field and quickly fell to a 10-3 hole. This prompted Hurley to use his first time out and replaced all but DJ Horne of the starting band.

As the Sun Devils fell to a 15-3 deficit, the substitutions turned out to be what the doctor ordered. Behind the duo of Jalen Graham and Luther Muhammad, Arizona State burst into the game. The team went on a 12-1 run, spurred on by a fierce defense and five quick points from Muhammad.

This reduced the deficit to 16-15 midway through the first half. What followed was a run by the Buffaloes to regain a double-digit lead at 29-19. Colorado found their shot with two successful 3-pointers, while ASU struggled to find the basket.

Then it was Graham who stepped in for the Sun Devils. The striker had a crucial offensive plateau and three-point streak. It cut the deficit to 29-24 and the energy in the crowd echoed that on the pitch. Enoch Boakye was fouled on a shaken block, resulting in a wave of boos from those in attendance.

That spark was enough to push ASU to a 7-0 run as the team cut Colorado’s lead to 29-28. Horne delivered in the final minute with a deep three, but the Buffaloes emerged with a 37-34 halftime lead.

Graham (11 points) and Muhammad (eight) each had impressive halves for the Sun Devils. They led the way from the scorer column, despite both coming off the bench.

Similar to the first half, Arizona State came out slow to start the second half. That played to the Buffaloes’ advantage as they made two quick 3-pointers to extend the lead to 47-40.

But it didn’t stop there for Colorado’s hot shot as the team landed two more deep shots to take a 56-45 lead. This forced Hurley to call a time out with 12:49 remaining as he felt his team needed to stop and pull themselves together.

Coming out of the break, the Buffaloes continued their red-light shooting. That charge was led by Tristan da Silva, who eventually finished with 11 points.

Despite ASU’s best attempts to knock down the baskets, the team went icy off the field. Defensive lapses didn’t help as Colorado boosted their confidence. The Buffaloes took a 15-point lead on the heels of a 12-2 run.

Fatigue was likely a factor in the Sun Devils’ downturn at that time. They were outscored 38-23 in the second half, a clear indication of Colorado’s dominance.

This also showed in the rebound battle as ASU lost that category by a 46-31 margin with ten by the Buffaloes coming from offensive rebounds. That sealed the deal for the Sun Devils as they lost 75-57.

The Sun Devils have a quick turnaround as they return home to face the Utah Utes on Monday. This match was originally scheduled for January 13, but was postponed due to COVID-related issues. Tipoff is at 2 p.m. Arizona time.