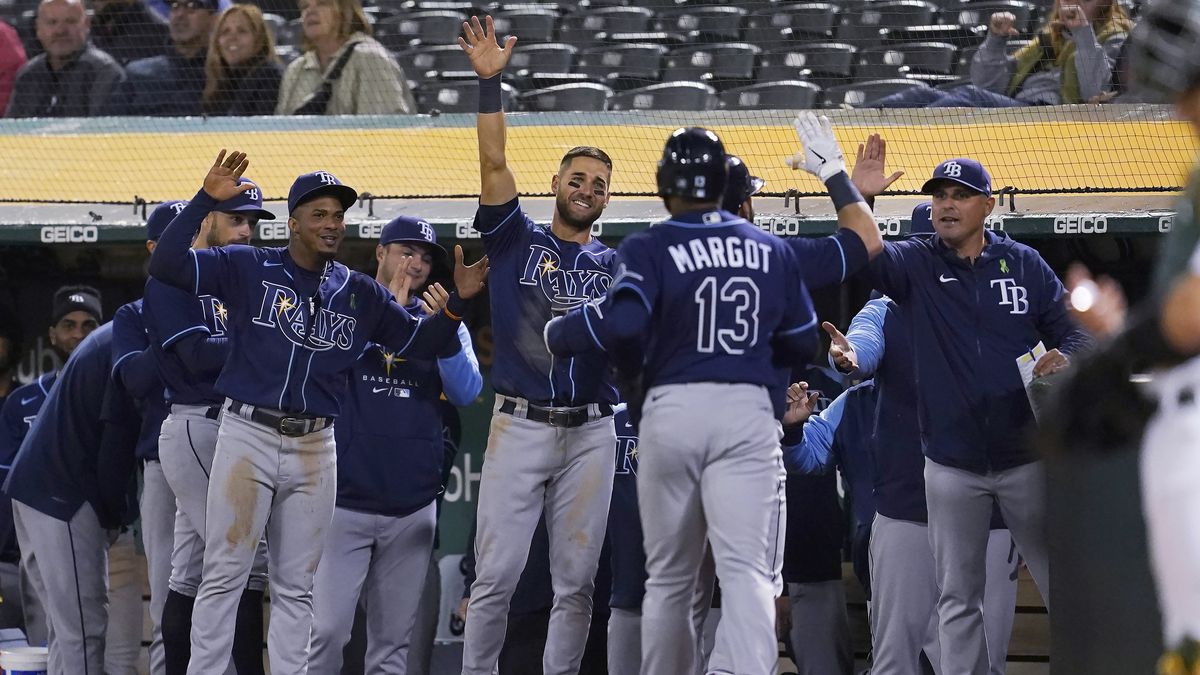 OAKLAND, Calif. — Tuesday’s game featured a hard-hitting return to the rotation from Ryan Yarbrough, another stellar outing in the bullpen, a spectacular game-tying two-run homer in the ninth inning by Mike Zunino and a very happy ending.

Yandy Diaz and Isaac Paredes led a five-point rally in the 10th, and Jason Adam worked around Sheldon Nouse’s RBI double and Sean Murphy’s single to get the final three outs and give the Rays an inspiring 10-7 win. .

The Rays (14-10) were down two runs and up their last two outs when they rallied to ninth against left-handed reliever Kirby Snead.

Manuel Margot launched them with a single. With manager Kevin Cash using right-hander Paredes to pinch Brandon Lowe to start the inning, he turned next to Zunino, who delivered a two-run homer to tie the game at 5. Taylor Walls followed with a single and went as far as third but was stuck there.

The Rays took an early lead in the 10th against Lou Trivino, as Diaz started with a brace to the center right to score Harold Ramirez, who started the inning as a second runner under the extra innings rule carried over from 2021 .

An intentional walk by Wander Franco and Randy Arozarena put the riders in second and third place. Paredes, acquired from the Tigers and called up when Ji-Man Choi went on the disabled list on Sunday, bounced a ball over third to score two. Margot tripled to Paredes and Zunino singled Margot to make it 10-5.

The Rays welcomed Yarbrough into the rotation with modest expectations, and he may not have met them, allowing five runs in the first inning and going just 2-1/3 innings. This forced the bullpen to work overtime, and the group deserved a bonus for an extraordinary outing.

Yarbrough, who missed the first 3½ weeks with a left groin tightness, had a rocky start, allowing all five runs in a miserable 31-pitch first inning that included three walks, including one with the bases loaded, and three hits, most including a Kevin Smith grand slam.

Yarbrough was scheduled to open the season in the Rays’ rotation, but was briefly delayed by the groin problem, then placed on the injured reserve for a scheduled short stint that lasted nearly a month and included two brief outings from rehab at Triple-A Durham.

Yarbrough got just one when he left rehab for Durham on April 23, throwing 27 pitches, then eight in his second, taking his workload to 59 pitches. They didn’t have those on Tuesday, nor the 70-75 shots they expected.

Yarbrough allowed two singles to start the first, then got a bad break with a good end when Arozarena couldn’t hold on to a left liner but sent off the lead runner on the third.

Columnist John Romano will be sending out the latest Rays news and analysis to keep you up to date each week during the season.

You are all registered!

Want more of our free weekly newsletters in your inbox? Let’s start.

Explore all your options

After a pop-up in the field, Yarbrough was one strike out of the inning when he narrowly missed high on a 3-2 pitch against Stephen Piscotty. Instead, the march loaded the bases and led to big problems.

Yarbrough walked Christian Bethancourt to force a point, then allowed the grand slam to Smith who added four more to make it 5-1. It took a running, sliding catch from Brett Phillips on the right-field line for the third out to maintain a four-run deficit.

The Rays got their run in the first when Franco, who reached a defenseman’s pick that forced Diaz after a first-in-field single, ran around the bases and through the coach’s backboard. of third baseman Rodney Linares to score on Brandon Lowe’s double to right-center.

They came within 5-3 with a brief exchange in the second. Kevin Kiermaier slapped a ball right and rushed out of the box to stretch it double, then Phillips hit a two-run homer.

Sign up for the Rays Report weekly newsletter to get fresh insights on the Tampa Bay Rays and the rest of the majors from sports columnist John Romano.