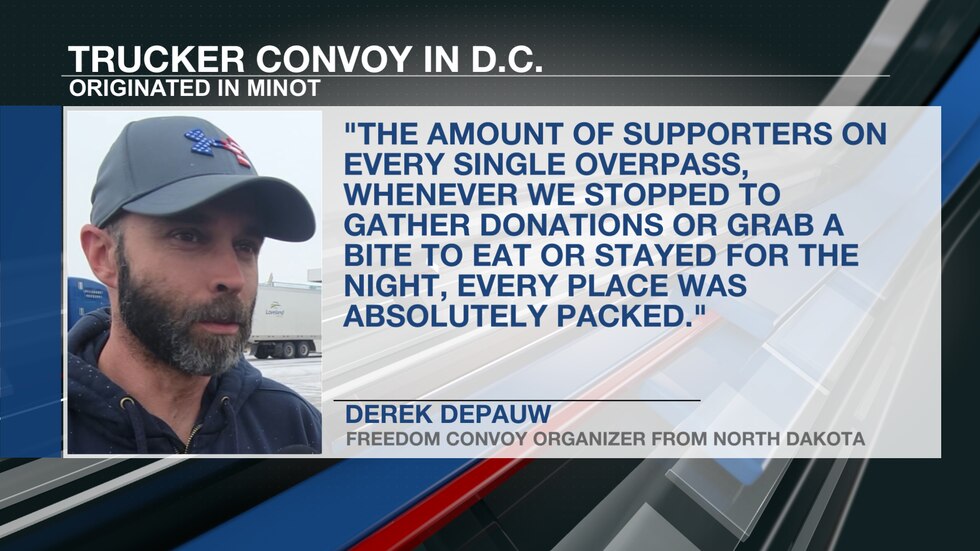 BISMARCK, ND (KFYR) — On Sunday, the Freedom Convoy of semi-trucks traveling from North Dakota to Washington DC to protest vaccination mandates arrived at their destination.

“I swear the more mandates in place the more people want to come out and show their support. It left me speechless, almost every overpass we passed under,” said Derek DePauw, North Dakota Freedom Convoy organizer.

Their destination isn’t actually in the nation’s capital, it’s just outside.

“Trucks are not allowed to be in DC unless they are actually city utility trucks. We will maintain our legal rights not to bring the trucks in yet. We want to see if we can shake things up first,” DePauw said.

On Monday, they met with Representatives Marjorie Taylor Greene of Georgia and Matt Gaetz of Florida. The objective is to draft a law.

“The main thing we’re talking about is scrapping the Emergency Act altogether, essentially not giving the government emergency power in such time as it deems necessary to create mandates and authority that doesn’t belong to the government. people,” DePauw said.

They also hope to introduce a bill that would give anyone in the United States the freedom to try experimental pharmaceuticals like hydroxychloroquine and ivermectin, in consultation with their doctor.

The Freedom Convoy hopes to achieve its goals through legislation. However, Derek DePauw says he and others are willing to stay for up to eight weeks if needed.