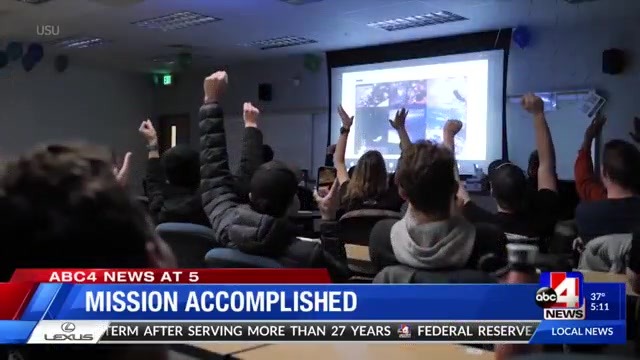 LOGAN, Utah (ABC4) — Last month, a team of students from Utah State University sent a small satellite to the International Space Station on a SpaceX rocket. Today, that satellite successfully entered orbit and, in doing so, propelled the team into history.

A digital ping sound could be heard on student phones and laptops on Wednesday. By listening carefully, one could recognize the melody. It was the USU fight song. The digital ping was a recording made around 5am. The sound was picked up by a radio station in Argentina, but it came from space. Source? A small satellite called CubeSat.

A team of undergraduate students woke up a few hours before sunrise on Wednesday morning. Some told ABC4 they had trouble falling asleep at a decent hour the night before. The lack of sleep was the result of a once-in-a-lifetime event. The students who form the USU Get Away Special Team were preparing to see their satellite launch into space after spending a month on the ISS.

When it launched, a packed house erupted in applause. However, the great test was yet to come. Would the satellite be able to communicate with its creators?

A new bill aims to save the Great Salt Lake

After half an hour, a radio station in Japan picked up a signal from the satellite. The students said at the time that they knew the satellite was working. Fifteen more minutes passed and the satellite was now over Argentina. Finally, a series of morse code beeps were picked up loud and clear, followed by the USU fight song.

“For me to hear that meant everything I had done; the hours and hours and days of testing that we put into it and making sure it worked when it was in space, and it all worked,” Jack Danos explained. “It wasn’t for nothing.”

Danos is the director of operations for the program, also known as GASPACS. He is a senior at USU and joined the team as a rookie. Like many undergraduates on the team before him, he hoped the satellite would be finished and sent into space by the time he graduated.

He said that with the successful launch of the satellite, this makes it the first-ever satellite built and designed entirely by undergraduate students to enter orbit. There’s also something even more impressive about this little satellite. Danos added: “From what I’ve been told, more than half of all CubeSats ever launched have never been heard from. They don’t get a single signal back for one reason or another.

The satellite (which is a small cube measuring about four inches in all directions) now orbits less than 300 miles above the planet. It’s the product of dozens of students who have spent the last 10 years developing this technology.

“The majority of our team when they built this satellite were freshmen, so straight out of high school, no idea how to build a satellite,” Danos said. “And the fact that we can all come together, and through a lot of hard work, put something in the space that now anyone in the world can listen to and hear the ‘Scotsman Tune’, that’s it again. I cannot describe it.

The students are now monitoring the satellite orbiting the planet. The next big step in communicating with the satellite will be getting a picture of it. It may happen this week. They are also testing the inflatable technology that is on the satellite. If this technology is successful, it could potentially influence future spacecraft.

Disability insurance can pave the way to health equity | EBA