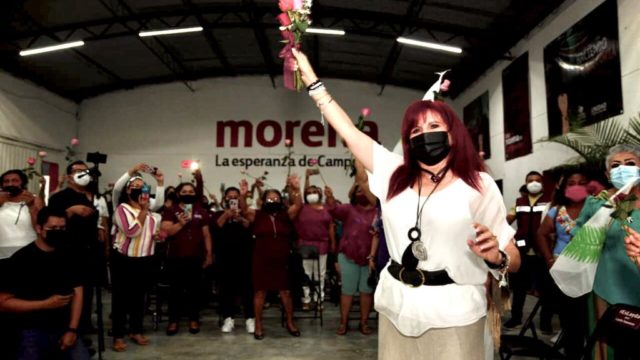 Of the 1,190 ballots in 21 electoral constituencies, the Electoral Tribunal only invalidated the results of 18 due to various anomalies.

MEXICO, (September 15, 2021) .- The Electoral Tribunal of the Judicial Power of the Federation (TEPJF) has ratified the triumph of the morenista Layda Sansores in the governorate of Campeche, after having certified the results of the total recount of the votes cast on June 6.

According to the results presented by the electoral magistrates, out of the 1,190 electoral packages from the 21 constituencies, only the results were canceled in 18, ie 1.5% of the votes.

With this, the Coalition “Together we will make history” formed by Morena and the PT won the elections with 139,000,503 votes; while Eliseo Fernández from Movimiento Ciudadano came in second with 133,000,627 votes.

A few weeks ago, the magistrate Janine Otálora Malassis ordered the local electoral authorities to recount all the votes in order to give certainty to the elections after the objection of the political party Movimiento Ciudadano.

The party claimed that the vote revealed an unwarranted difference between the votes cast for the governor’s vote and that of the local councils.

However, the magistrate considered that these accusations had no justification since it was not verified that the ballot boxes had been filled with false votes in favor of the candidate Morenista.

“The party had to directly accredit the irregularities in the votes received at the ballot box for the election to the post of governor. In addition, the party denounces that the unjustified difference is one thousand and 47 votes, which does not reflect a potential difference, ”said Otálora.

“The final tally is in favor of the candidate nominated by the coalition made up of the Morena and Labor political parties, with a total of 139,000,503 votes,” said the draft decision.