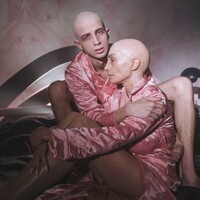 Rushing out the door like a heartbreaking and hilarious crossover of What happened to Baby Jane? and dog toothwith the most acerbic sensitivity of John Waters and the aesthetics of a deranged Wes Anderson, the second feature film by Eduardo Casanova The Pieta is a film that will leave an indelible mark on viewers. Whether that mark is a seal of approval or a weeping gash is another matter entirely, and much depends on which of the two is more appealing to one’s own sense of beauty.

The story of Mateo (Manel Llunell) is that of a young man attached to his overbearing mother, Libertad (Ángela Molina) through a fabricated sense of obligation and dependency. Mateo is a slender, thin, and slight man, seemingly frail in both looks and build, whose mother dictates every move they both make. Inside a sterile, surprisingly angular house that Libertad has bathed in soft pink, the two live their lives for each other. Mateo because he doesn’t know anything else, and mother because while she may have severed the physical umbilical that connected them, the emotional cord acts as a leash with which she can control her son and her own environment.

When Mateo accidentally finds out that his long-estranged father is dying and wants to see him, he forces himself to break up with his mother, causing chaos and questioning his own worldview and self-esteem. non-existent autonomy. All of this happens amid aggressive cancer treatments, aborted therapy appointments, mental and emotional meltdowns for mother and child, and a disastrous pedicure.

What Casanova has created here is a stunning visual and sonic feat, with the image of Michelangelo’s La Pietà at its center not only literally, but also the emotional weight of a mother mourning her child. Libertad treats her son not just as if he were a helpless child, but as a piece of herself, a piece she hates letting go, even to bathe alone. It is no coincidence that Libertad translates to Liberty, a privilege she grants neither herself nor Mateo, the irony is blatant, but tragic.

The Pieta is tragicomic in the extreme perhaps only comparable to Todd Solondz’s best work, a high bar that also serves as a benchmark that will take the temperature of the viewer contemplating stepping into Casanova’s absurd reality. Its script is alternately tender and raw, with Molina’s perfectly disconnected performance complementing Casanova’s image of the mother who is so co-dependent on her son that she cannot separate their ailments. There’s a moment when a cancer diagnosis is received and Libertad can’t seem to disambiguate the victims, it’s a bit of a joke, but there’s real pathos in her delivery.

Llunell, on the other hand, displays an uncommon ability to deliver a performance that is both powerful and fully submissive and subdued. Mateo is so used to deferring to his mother, that his lifeless skin pales against the garish pink backdrop of his surroundings. Even when his world begins to crumble, he cannot muster the strength of much more than a single bellow of pain, but that bellow is enough to shatter the manufactured perfection of both his surroundings and the audience that has been conditioned to his silence.

There’s a lot going on here, including an extended metaphor comparing the mother-child relationship to the long-term mass psychosis between Kim Jong-il and the North Korean people, and the comparison is apt. It’s a combination of co-dependent Stockholm syndrome and vicarious Munchausen syndrome that shouldn’t be funny, but is brilliantly written dark comedy in a world of pink pastels. Unfortunately, we’ve been advised that much of the North Korean imagery will need to be changed after this screening due to conservative forces, but it’s so powerful that I don’t think it will interfere with the message much. However, as a fan and advocate for artistic freedom as long as no one gets hurt, that seems like a stupid line to draw. To Casanova’s credit, he’s also not a fan of the changes, and the movie stands on its own.

Although there are many direct lines from which one can draw The Pieta to his influences – many of which I’ve tried to include here – I’ve never seen a collection of ideas and images quite like this before. It is a singular vision, painstakingly articulated, a contrast of beauty and horror at the level of the Divine in female disorder, but even more emotionally resonant. Casanova and his cast have done something huge here, creating a work in which the breakdown is obvious, but not obvious; where relationships are recognizable, but ridiculous; and where inner pain is drawn to the body in a way we have never seen before. It’s beautifully vulgar and shocking, a film that draws inspiration from a lot to create something absolutely unique. Casanova builds his own worlds, and while you might not want to live in them, there’s nothing quite like the journey.