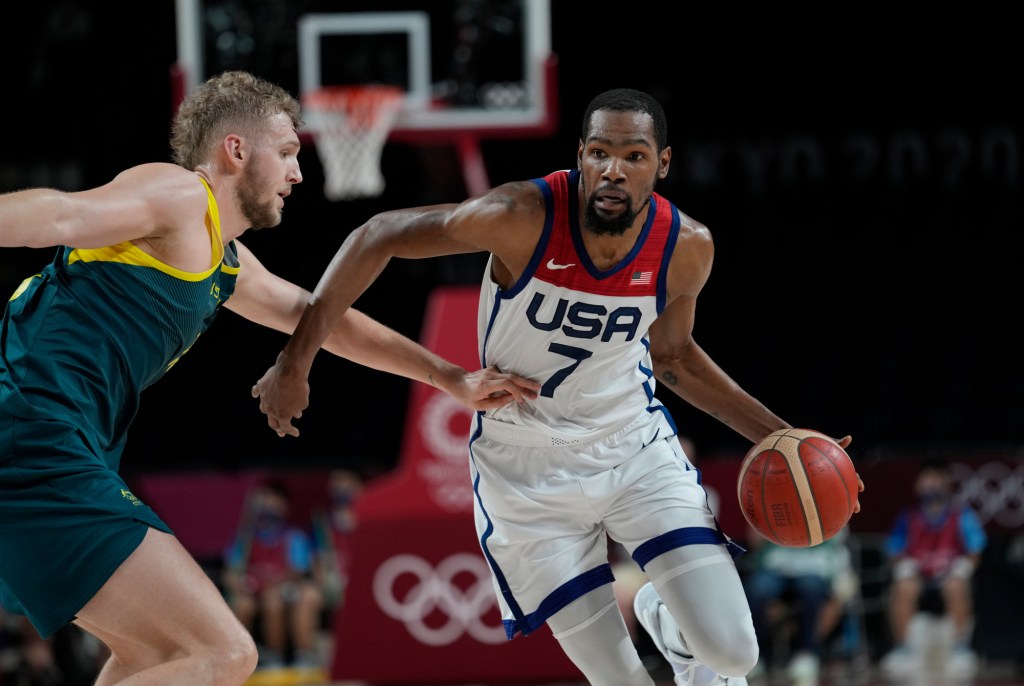 SAITAMA, Japan – The US men’s basketball team has owned gold for three straight Olympics, making the middle of the medals platform property of the Americans.

The Australians tried everything they could to shove them off.

“They hit us with a nice punch,” Kevin Durant said after their Olympic semifinals matchup. “We knew that team was going to get us down early and see how we’d respond.”

The response was not what Australia had hoped.

Durant scored 23 points, Devin Booker had 20 and the US blew past and eventually blew away the Aussies, 97-78, on Thursday (Wednesday night PT) after falling into a 15-point hole.

With their gold-medal streak looking in jeopardy midway through the second quarter, the Americans overwhelmed the Australians with a 48-14 stretch that gave them a 74-55 lead after three periods.

The US missed its first 10 3-point attempts and didn’t hit one until late in the second quarter. Then it felt as if the Americans hardly missed again, with Booker making three 3-pointers.

“Obviously, getting down 15 points you know you’ve got to bring it up a notch and that’s what we did,” Booker said.

Jrue Holiday had 11 points, eight rebounds and eight assists for the US, which will play European champion Slovenia or France in its quest for a fourth consecutive gold medal on Saturday (Friday, 7:30 pm PT). The French beat the Americans, 83-76, in their Olympic opener.

That was part of a 2-3 start to the summer for the US, which included a loss to the Australians in an exhibition game in Las Vegas.

They look like the best team in the world, like those that used to win gold with ease.

It’s clear the Americans still have their grip on gold and it’s going to take more than a few bad minutes for anyone to take it away from them.

The Australians have finished fourth in the Olympics four times, including in 2016, but believed this time they could bring home gold.

For 1½ quarters, it looked like they’d get a chance.

They dropped the Americans into their second double-digit deficit in two games, outplaying the world’s top-ranked team and looking capable of forcing the US to settle for anything other than Olympic gold for the first time since the Americans stumbled home with bronze in 2004 .

But the US recovered and romped after halftime, improving to 9-0 against Australia at the Olympics.

“In the locker room, it basically was, ‘How bad do you want it?’ And we came out with the same intent we had in the first half, ”Australia’s Nic Kay said. “We didn’t do it at the level we needed to. It’s unfortunate. ”

The minutes before the first semifinal were another unusual scene in these most unusual Olympics, when the public address announcer pleaded multiple times for players to clear the court while Durant and Mills were warming up so a robot that entertains the almost-nonexistent audience could perform his shooting routine before the game.

The robot missed both his attempts from midcourt. His long-range shooting was off.

So were the Americans, at least for a little while.

The Australians opened an eight-point lead while the Americans managed only one basket over a span of more than four minutes. Australia took a 24-18 lead into the second quarter after Chris Goulding made a 3-pointer in the closing seconds.

The US kept misfiring from behind the arc and even had some shaky moments at the rim – Khris Middleton had an open dunk attempt coming off the baseline, but he slammed the ball into the front of the rim.

The Australians took advantage with eight straight points midway through the second. Dante Exum made a 3-pointer, Matisse Thybulle converted a three-point play after scoring on the break and Exum threw a lob to Jock Landale to make it 41-26 with 5:23 left.

But the Australians got only one basket the rest of the half and will look back at that stretch if they again go home without a medal. They still led by 11 with 2:59 left, but the Americans cut the deficit to 45-42 by halftime.

“Last five minutes of the second quarter they were fantastic and it continued into the third,” US coach Gregg Popovich said.

The Americans started the second half with two buckets from Holiday and two more from Durant. By the time the Australians got a basket nearly four minutes into the half, the US had opened a nine-point lead.

The US outscored Australia 32-10 and led 74-55 heading into the fourth quarter.

“Everything fell in line for us in that second half and that’s who we are,” Durant said.