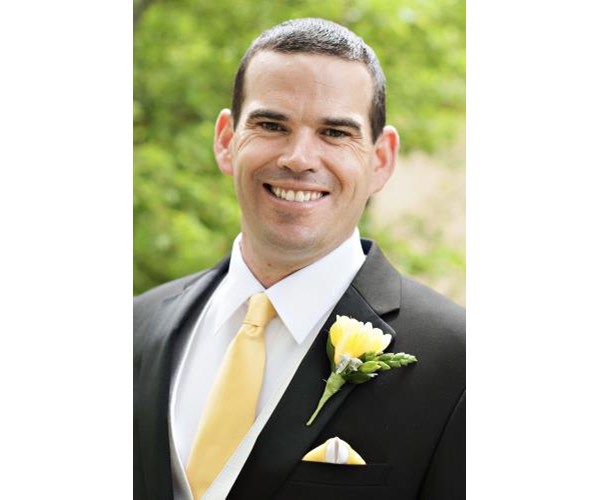 VERONA – Jim Lemon, 43, passed away peacefully on the morning of Tuesday, August 17, 2021, with his wife, Kate, by his side. He had bravely battled stage four metastatic pancreatic cancer for almost two years.

Jim was born on February 16, 1978 in Madison, Wisconsin, the son of Elmer and Betty (Bendt) Lemon. He graduated from Madison West High School where he participated in both golf and basketball. Jim led his golf team to a state high school championship where he was also individual champion in 1995. In 1996, the team won second place in the state tournament, with Jim also taking second place in as an individual. Jim was recruited by head golf coach Dennis Tiziani of the University of Wisconsin-Madison and earned a golf scholarship. To say that Jim was an accomplished golfer is a huge understatement. While at the university, Jim was part of the traveling varsity team for four years. He was the WSGA amateur match play champion consecutively in 1999 and 2000, and later in 2000, he won the Badger Invitational. He was instrumental in four UW Tag Team Championships: 1998 Iowa Invitational, 1998 Beth Page Invitational, 2000 Wisconsin Invitational and 2000 Ohio Invitational. He was a team captain from 1998 to 2001 and also served on the Student Athlete Advisory Board from 1999 to 2000. He was awarded the Academic All-Big Ten Honors award every four years, and one of the most successful accomplishments. Proudest of Jim was to become the second UW male golfer in the school’s history to become an Academic All-American in 2000 and 2001. After graduating in 2001 with a double bachelor’s degree in accounting and in operations and information management, Jim built a career in professional golf. Jim qualified for the PGA Tour Canada where he competed in over 40 tournaments and finished 12 in the top 25. He clocked over 150 birdies and clocked a career-high 64 in tournament play. He was a member of the PGA Tour Canada from 2003 to 2015, where he was also Director of Players on the Canadian Tour Council from 2009 to 2013, another moment of great pride for Jim. He competed in the second leg of the PGA Tour qualifying tournaments from 2005 to 2009. Some of the most notable tournaments Jim has competed in are the Nationwide Tour Midland Classic 2008, the PGATOUR US Bank Championship 2007, the Nationwide Tour LaSalle Bank Classic 2003 and 2005, the Nationwide Tour Louisiana Open 2005 and the PGATOUR John Deere Classic 2003, where he played a memorable practice round with current PGA golfer Vijay Singh. Jim’s most memorable round of golf, however, was playing Augusta National Golf Course with a close family friend in the fall of 2020. He said it was way beyond what he had. never imagined and that it was a dream come true. Jim also enjoyed playing golf with his family and friends at their golf club, Nakoma, in Madison, Wisconsin, where he holds 10 club championships. As if that weren’t enough, if you asked Jim how many holes he had in one, he would humbly reply: “either 12 or 13, I lost track”. He was so good. Best of all, he was a great person off the golf course as well. Everyone who knew Jim described him as honest, caring, loyal, ambitious, courageous and genuine. Jim was a real gift to the people in his life.

Jim would attribute much of his success on and off the golf course to the coaches in his life. He always said his first trainer was his late father, Elmer Lemon. Elmer and Betty taught Jim how to be a competitor and how important it is to surround yourself with the right people. Before taking the start, Jim’s mother reminded him to keep his chin up, a smile on her face and to bounce in his step! Jim also thanks the late Allan Mitchell Jr. (former Nakoma Golf Club Professional), the late Roger Wiebe (former Madison West High School golf coach) and Dennis Tiziani (former UW golf coach). Granted, there have been other coaches in Jim’s life outside of golf, and he has often said how much he appreciates all of their friendships and mentorship.

When Jim retired from professional golf in 2011, he pursued a career as a financial advisor where he met his brother-in-law, Benjamin Wierwill. Jim then joined his best friend, Chris Tierney, at Merrill Lynch where he was Senior Financial Advisor and Vice President. He and Chris have formed a powerful team to help their clients achieve their dreams. Many of Jim’s clients have been influential through his past accomplishments, and he has felt great satisfaction in being able in turn to help them achieve their financial aspirations. He loved his job so much that it was difficult for him to say whether he was working or playing, the good advice given by his father. Jim continued to play in a few golf tournaments each year and found success again in 2013 when he won the Wisconsin State Open. Naturally, credit for this victory has gone to Kate since they were dating.

Jim married Kathryn “Kate” Wierwill on May 16, 2015 in Madison, Wisconsin. As Kate is also a former UW-Madison golfer, there was some friendly competition on the golf course, mostly for those cooking dinner that night. They have also enjoyed many golf vacations together, including visiting with friends at PGA West. Jim and Kate built a house in 2017 and added a son, Maxwell, to their family in 2019. One of their favorite family activities was playing a few holes of golf on Friday nights in Nakoma and having dinner together. Jim and Kate had an unwavering bond that led them through the recent challenges of fighting cancer. They made cancer revolve around their young family life, not the other way around.

The most important things for Jim were spending time with his family and helping others. He and his father spent many hours on the family farm in Monticello, Wisconsin, tinkering with projects, mowing Jim’s golf course, pheasant hunting with friends, and watching badger games. Jim also loved woodworking and made a lot of furniture in his workshop on the farm. He loved being a brother and uncle and has fond memories of his family on the farm with Kate, Max, his mother, his sister (Jane), his brother-in-law (Daniel), his nieces and nephews, driving tractors through the trails. of wildflowers, hunting, sledding and talking about the future plans of the farm which has been owned by the Lemon family for 150 years. Jim’s father, Elmer, was an integral part of the Monticello Foundation, and Jim maintained the dedication so as not to forget his roots. Jim’s sister, Jane, now carries on the Foundation’s legacy as an active member of the Board of Trustees.

Of all Jim’s accomplishments, his proudest moment was becoming Maxwell’s father. His son was the driving force and the light during Jim’s battle with cancer, and even when Jim wasn’t feeling well after the treatments, he went out of his way to play with Max. Jim loved to introduce Max to his hobbies and interests, including cars (Dada’s brooms), use his carpentry tools, mow the lawn, drive tractors, take care of pheasants, play golf and basketball and snuggle up to their 7 month old puppy, Koko.

Jim has always believed that life is not what happens to us, but how we react to what happens.

A Christian funeral mass will be held in ST. MARIA GORETTI CATHOLIC CHURCH, 5313 Flad Ave., Madison, Wednesday, August 25, 1 p.m., chaired by Father Jay Poster. Interment will follow in the cemetery of the Resurrection. A visit will take place at the church on Wednesday from 9 a.m. until the time of mass.

In lieu of flowers, please consider a donation to The Lemon Brothers which benefits the UW Carbon Cancer Center Innovation Fund for Cancer Research and Cure: www.classy.org/fundraiser/3152028.

Power and poise at the grand occasion indicate Limerick’s triumph