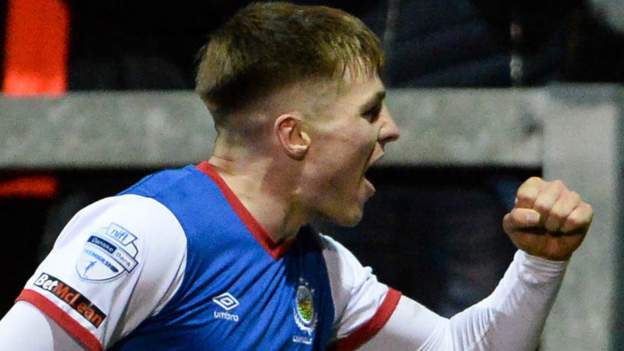 Linfield returned to the top of the Premiership with a 2-1 win over Carrick Rangers at Taylor’s Avenue.

The champions took an early lead when Thomas Scully deflected Jake Hastie’s cross into his own net.

A backheel from Chris McKee made it 2-0 after 37 minutes as Linfield dominated the first half.

Jordan Gibson pulled one back for an improved Carrick midway through the second half, but Linfield held on and got the upper hand on goal difference.

It is a fifth successive league defeat for Rangers and they remain six points above the relegation zone in 10th.

Linfield got off to the perfect start as an unfortunate Scully redirected the ball past goalkeeper Aaron Hogg after Hastie charged down the left.

Hogg fended off a stinging strike from Kyle McClean and Mark Surgenor raced in to make a timely tackle as McKee prepared to crush the rebound.

However, McKee was not to be denied a goal and he provided a smart effort from close range to end a rush on goal and double the lead.

Blues striker Christy Manzinga had a goal ruled out for offside and then headed an overhead header as the visitors finished the first half firmly in the lead.

Manzinga squandered a golden chance to add a third early in the second half when he was sent off clear, but his shot was saved well by Hogg.

Rangers eventually threatened at the other end and Steven Gordon had his header cleared off the line by Chris Shields.

Gibson made no mistake in the 67th minute when he weaved through the penalty area before kicking the ball inside the post and into the net.

Carrick chased an equalizer and they went close with four minutes left when Emmett McGuckin fired wide with the Blues hanging on for a vital three points.

Know the Facts About Unsolicited Mail After a Loan | Columns