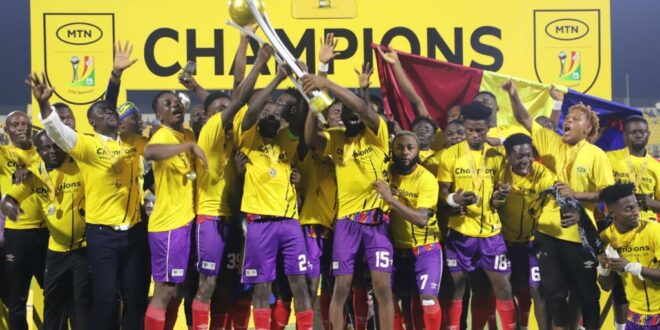 Accra Hearts of Oak came from one goal to overcome a stubborn 10-man Bechem United to defend the MTN FA Cup they won last season at Baba Yara Stadium.

A 45th-minute goal from Emmanuel Avornyo opened the stalemate in a combative first half that saw both teams create decent chances.

The Phobians, however, stuck to their ‘never say die’ motto when they restored parity in extra time to finish the first half without a deficit.

Hearts created the first chance after two minutes, but Bechem United goalkeeper Abdulai Idrissu came off his line to intercept a dangerous ball in the box.

Bechem took control of the game within five minutes, bombarding Hearts of Oak’s vital area with a series of attacks, but failed to make the chances count.

The Phobians, however, had the best chance to go forward against the run of play in the 10th minute when Afriyie Barnie was released with a defensive pass, but he missed the glorious opportunity.

In the 16th minute, Accra Hearts of Oak called for a penalty after Barnie was knocked down in the box, but referee Abdul-Latif Adaari would have none of that as he waved play.

The Hunters took the lead on the brink of half-time as the Phobians defense were caught eyeing the ball.

It was a quick rise from midfield as Bechem moved from defense to attack with Augustine Okrah, Clinton Duodu and Avornyo combining beautifully during the onslaught.

An early goal attempt was saved by Richmond Ayi, but Avornyo was on hand to plant the rebound past the keeper.

Just when everyone thought the referee was about to end half-time, Caleb Amankwah sent the Phobian fans into a wild jubilation with a superb equalizer.

The defender connected a Samuel Inkoom inswinger in style, leaving both the Hunters backline and goalie in wonderland.

The second half resumed with both teams determined to annex the coveted trophy in front of an impressive home crowd.

The Phobians took the lead for the first time in the match thanks to Barnie who linked up a magnificent cross from Gladson Awako.

As the Hunters pressed for the equalizer, their top marksman, Augustine Okrah, took an early shower in the 64th after an altercation with assistant referee one, Stephen Balanguena.

The winger who was infuriated by a decision from the assistant referee headed him to the mouth, leaving referee Adaari no choice but to show him the exit.

Despite being shorthanded, Bechem United pushed for the equalizer as they threw more men up front.

Mohammed Alhassan nearly gave up a goal five minutes from time when he offered the ball to an opponent in the vital area only for the striker to miss the chance.

Hearts managed to hold on for the remaining minutes of the match, successfully defending the FA Cup for two consecutive seasons.