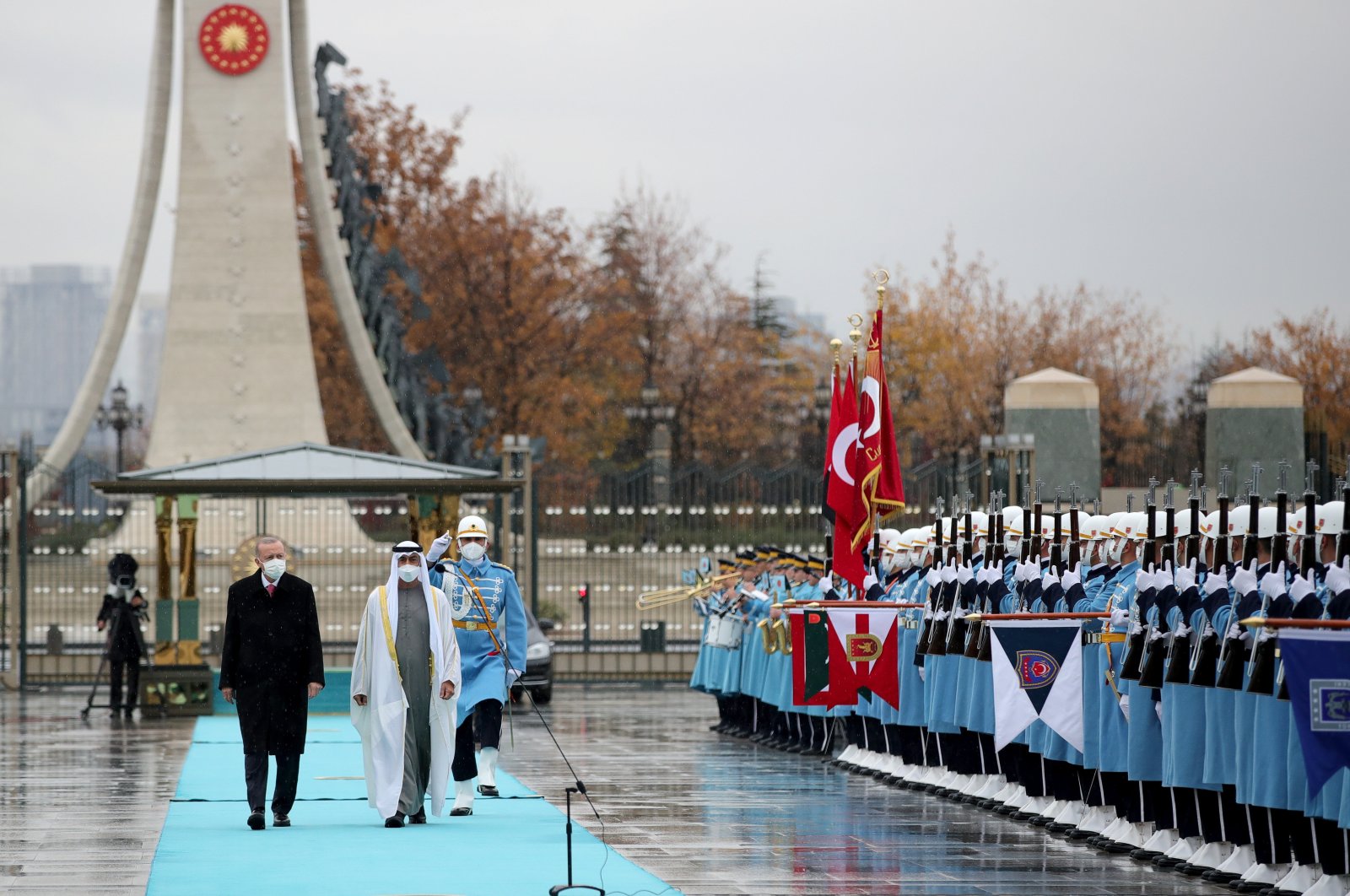 Greater collaboration between Turkey and UAE for the benefit of the region: Erdoğan

Ahead of his two-day visit to Abu Dhabi on Monday, President Recep Tayyip Erdoğan stressed that increased collaboration between Turkey and the United Arab Emirates (UAE) will also benefit the whole region.

During the visit, all aspects of bilateral relations will be discussed, including possibilities for strengthening regional and international cooperation and developments. Erdoğan is also expected to visit EXPO 2020 Dubai.

In an exclusive article written for the Emirati daily Khaleej Times on Saturday, Erdoğan said Turkey was strengthening its relationship with the UAE on the basis of mutual trust and respect.

Expressing satisfaction with the evolution of relations between the two countries towards collaboration, the President said that “the growing rapprochement between Turkey and the United Arab Emirates is gaining new momentum following our bilateral visits”.

“I believe that increased collaboration between the two countries will also benefit our region. It is particularly remarkable that the rapprochement has developed during a period of increasing global competition,” he wrote.

“The two countries have the potential to collaborate in a wide range of areas around the world, especially in our immediate neighborhood and in Africa,” he said.

“Turkey, with its geopolitical situation, its human capital, its area of ​​activity, its production capacity and its stabilizing role, has become a center of attraction and is always open to constructive collaboration.

“The fact that the recently intensified dialogue between Turkey and the UAE has turned into genuine collaboration demonstrates that if we take the lead, we can shape our common future together,” the president wrote.

Erdoğan added, “Turkey and the UAE can together contribute to regional peace, stability and prosperity.”

During his upcoming visit to the UAE, Erdoğan said it will “not only demonstrate the importance we attach to the friendship between the two countries, but also allow us to strengthen our cooperation.”

Erdoğan and MBZ oversaw the signing of nearly a dozen cooperation agreements, including in the fields of technology, energy, trade and the environment, as well as agreements allowing direct investments and a cooperation between the stock exchanges and central banks of the two countries. Abu Dhabi also announced a $10 billion fund for investments in Turkey during the visit.

“In addition to energy, health, agriculture, logistics, infrastructure, finance and tourism, we aim to advance cooperation between Turkey and the United Arab Emirates on climate change, water and food security,” he wrote, adding that “both sides are keen to set new targets for further investment and cooperation.”

“This cooperation will have positive reflections not only in bilateral relations but also at the regional level. In this context, these positive developments in our relations are valuable in themselves,” he said.

He noted that Turkey “appreciates all the countries in the region”, while adding that the United Arab Emirates is Ankara’s biggest trading partner among the members of the Gulf Cooperation Council (GCC).

Citing the most recent non-oil trade volume between the two countries, Erdoğan said Turkey intended to double that volume in the coming years.

Likewise, speaking to the daily, Foreign Minister Mevlüt Çavuşoğlu said that in terms of trade and investment, the holding of the Joint Economic Commission (JEC) meeting in November 2021, after nearly five years, was a milestone.

“We are happy to see that the relations between Turkey and the United Arab Emirates are back on track. Our countries have clearly demonstrated their desire to open a new page in our relations. The current momentum in all areas of our relations testifies to the fact that both sides have been ready and willing to continue bilateral cooperation,” he added, indicating that Turkey-UAE cooperation has a “bright future.”

“Our relations draw their strength from common cultural values ​​and strong ties between our peoples,” Çavuşoğlu added.

He went on to say that new political dynamics in the region and globally present both challenges and opportunities. “We can only overcome these challenges and seize the opportunities if we are able to achieve meaningful cooperation and solidarity,” he urged.

The two countries have seen their relationship affected by regional tensions, including the conflict in Libya, where the United Arab Emirates and Turkey have backed opposing sides in recent years.

Relations hit a historic low when Erdoğan said Ankara could suspend diplomatic relations with the Abu Dhabi administration after the UAE-Israel deal.

However, the year 2021 has seen Turkey seek warmer ties with several regional countries and longtime enemies after many tumultuous years.

Converging interests have led to regional power shifts in the Middle East, mainly led by regional powers Turkey and the United Arab Emirates.

The diplomatic maneuver signals a growing realization across the region that U.S. interest is shifting elsewhere and that the time has come for negotiations that were unthinkable just a year ago.

Turkey is also engaged in an effort to mend frayed ties with other regional powers, including Egypt and Saudi Arabia.