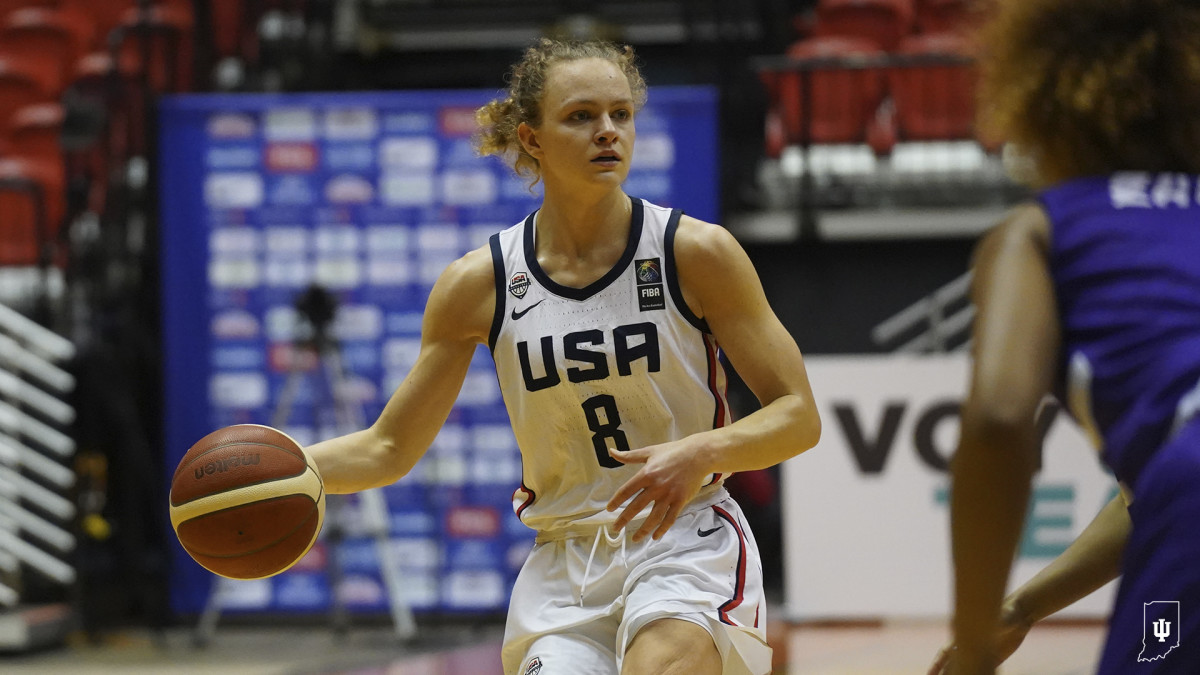 INDIANAPOLIS, Ind. – Grace Berger never thought she would have an opportunity like the one she had last summer.

Berger has been invited to participate in the United States team to compete in the 2021 AmeriCup.

The Indiana guard secured a spot on the 12-team roster and spent her summer winning gold in Puerto Rico.

Her best game came in the quarterfinals against the Virgin Islands where she scored 13 points, five rebounds, three assists and two steals.

â€œIt was an incredible experience,â€ Berger said on Big Ten Media Day on Friday. “It was very surreal. Something I would never have thought of in a million years, I would have the opportunity to do it. So just to be able to compete with the best players in the country and be coached by a great trainer at Dawn Staley, I think it will really benefit me in the future. “

Her teammates and coaches have already noticed how much this experience has helped her.

Head coach Teri Moren knows Berger is an already confident player, but she noticed “a whole new level” of confidence after returning from Puerto Rico.

â€œI can tell you this,â€ Moren said on Friday. â€œNo one worked harder than she on her game and deserved the opportunity to play for the United States of America more than Grace Berger. We were obviously delighted for her. It did a lot for her confidence, without no doubt.”

Her teammate Ali Patberg has seen Berger grow up every offseason, so she doesn’t think it’s any different than what she’s used to seeing, but Patberg knows the experience has been invaluable.

â€œI think it was a great experience for her. She got to play with really, really talented players. She had to work with the best coaches in the country, so she’s going to improve, â€said Patberg. â€œI think it’s just the constant, every day Grace comes to work hard. She’s always improving, and I’ve seen her since she came here to IU. So nothing has changed. His game has evolved enormously. “

That’s the way Shepherd is led. This is how Moren wired his team.

There has never been so much hype and outside expectations for the Indiana women’s basketball program, but to them it doesn’t matter what they did last season. This year.

They don’t just expect to go out and dominate, and they certainly don’t feel like the favorites.

“Personally, we feel like we haven’t accomplished anything.” said Berger. “Our goal is to win the Big Ten, make a Final Four and win a national championship.”

It will mark Berger’s senior season, and she got a taste of what it was like to get so close to a Final Four with her teammates last year in San Antonio.

Indiana will be in the news a lot this season. The Hoosiers are ranked among the best teams in the country, ranking No.7 in ESPNW’s Top 25 Way Too Early and No.8 in the NCAA.com preseason poll.

Indiana will also be on national television 13 times this season.

But with the mentality that Berger and his team have this offseason – that they don’t owe anything just because of the standings – the Hoosiers don’t feel any pressure.

They intend to emulate the way Berger runs his business: you just have to show up and work to improve yourself, and then maybe, just maybe, what the Hoosiers will feel like they have. accomplished something at the end of the season.

â€œWe don’t see this as pressure,â€ Berger said. â€œWe still feel like we are this blue collar team that has done nothing. We show up every day, try to improve by one percent every day and achieve the goals we set for ourselves. . “