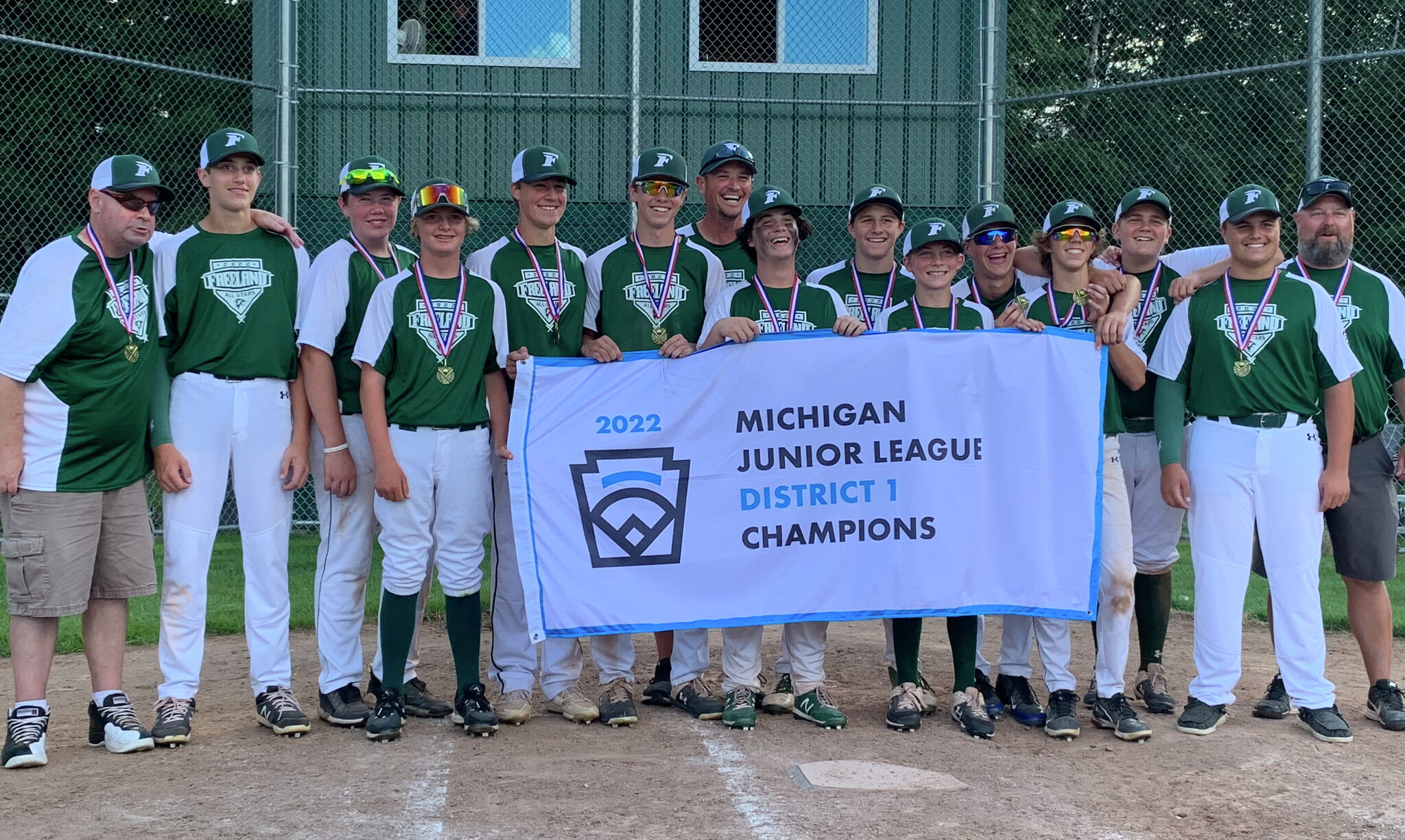 Freeland’s Junior League Baseball stars have had to play in one area all summer long. And now they will have their chance.

Behind an excellent pitching performance from Connor Lasceski and equally solid defending and striking, Freeland beat Shepherd 9-3 on Thursday in the Junior League District Tournament Championship Game at Larkin Township Park in Midland. Since District 1 is hosting the next Central Region Tournament, Freeland, as the District Champion, will receive an automatic regional bid.

“It’s damn good – mission accomplished,” Freeland manager Chad Schuette said with a big smile. “We told the boys before the game, ‘Don’t let the moment get bigger than the game.’ We knew Shepherd was going to come out and give us a good fight, and we weren’t disappointed. They came out and fought, and our guys kept their cool and did what they know how to do.

“…They’re smart ball players, very smart ball players,” Schuette added of his team, which also won the district title last summer. “They know how to react to whatever comes their way, and they all work extremely hard to make sure they can get the job done when it’s time.”

Lasceski, who also picked up the win in Monday’s District Opener against Midland, went the distance to take the win. He allowed just one earned run on five scoreless hits, while Freeland’s defense made just one error and made almost every play easy.

“Let the defense do its thing,” Schuette said of his pitching approach. “All of these guys have complete faith in each other, and they all know that if we make a mistake, we’ll move on and be ready for the next moment.

After Shepherd went down in order in the top of the first inning, Freeland took a 2-0 lead in the bottom half on an RBI double to deep right field from Lasceski and a solid RBI single from Tucker Hileman.

Lasceski again retired the team in order in the top of the second, and Freeland fired three more runs in the bottom half on two hits, a walk and two errors. Lasceski’s double single in the middle was the big blow of the set, making it 5-0.

In the top of the fourth, however, Shepherd finally got something after a Freeland error and a batter opened the door for a big inning. Shepherd then got RBI singles from Charlie Robinson and Easton Vanalstine sandwiched around a pitch scored by Kaden Yuncker to cut the deficit to 5-3.

Freeland stole the momentum right away, however.

Late inning, a pop-up dropped by Shepherd gave Freeland an opportunity – and the team seized it, scoring on Liam Rump’s two-run double deep into the left center field gap and on a another solid RBI single by Hileman to push back the lead to five, 8-3.

Lasceski did the rest, striking out Shepherd in order in the fifth, sixth and seventh innings, while Freeland added an insurance run in the fifth for the final margin.

Lasceski went 2-for-3 with three RBIs for Freeland, while Hileman had two hits and two RBIs, and Karson Worth scored a single, walked, drove in and scored three times.

For Shepherd, Mason Eisenberger went 2 for 3.

When asked what he was most looking forward to at the Central Region tournament, which takes place August 6-12 at Larkin Township Park, Schuette immediately replied, “Spending more time with those boys.”

He added that he expects fierce competition, a fun atmosphere and a lot of composure from his team as the regional kicks off.

“First and foremost, we expect great baseball. We won’t be facing anything but state champions, and we’re going to have to take our game to another level. We’re looking forward to this. challenge,” Schuette noted.

“…These guys are connected. They live, eat and breathe baseball, and they know how to ignore anything beyond that fence line once the game starts,” he added.