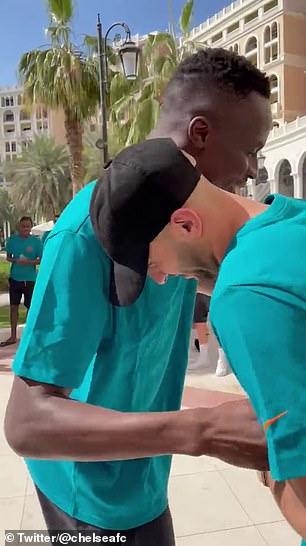 By Ollie Lewis for Mailonline

Edouard Mendy received a delighted ovation when the Senegal goalkeeper reunited with his Chelsea team-mates after their Africa Cup of Nations triumph.

The shooter briefly returned to Senegal where he was given a hero’s welcome along with his teammates as the nation was given a public holiday to celebrate their historic win.

Mendy shared footage of himself on top of a bus as he made his way through the streets of Dakar, with supporters dancing, waving flags and basking in the triumph of Aliou’s team Cisse.

Today the 29-year-old left the Senegalese capital for the Middle East, where he joined his Chelsea team-mates ahead of the Club World Cup in Abu Dhabi.

The Premier League club shared a video of the goalkeeper returning to camp, with teammates applauding and cheering the goalscorer after his exploits with his national team.

After celebrating in Dakar, Mendy is back in the Chelsea camp for the Club World Cup

Mendy can be seen hugging Jorginho, as well as greeting Matteo Kovacic and Antonio Rudiger in the video.

The goalkeeper can clinch a second trophy within days as Thomas Tuchel’s side strive to win their first-ever Club World Cup.

The Blues took part in this tournament 10 years ago, but lost to Brazil’s Corinthians in the final in Yokohama.

Chelsea face Al Hilal in the semi-finals on Wednesday and Blues assistant Zsolt Low was unable to confirm whether Mendy will feature in the latest clash.

“He has to get there first, we have to check him out and talk to him,” Low said. “We will see if it is possible for him to play, maybe.

“We have two amazing goalkeepers. Mendy put in a fantastic performance to win the Africa Cup of Nations and be the best goalkeeper, but Kepa is doing an amazing job with us here.

Ben Chilwell has also joined his Chelsea team-mates in Abu Dhabi, with the England left-back recovering from a knee injury which ruled him out for the rest of the season.