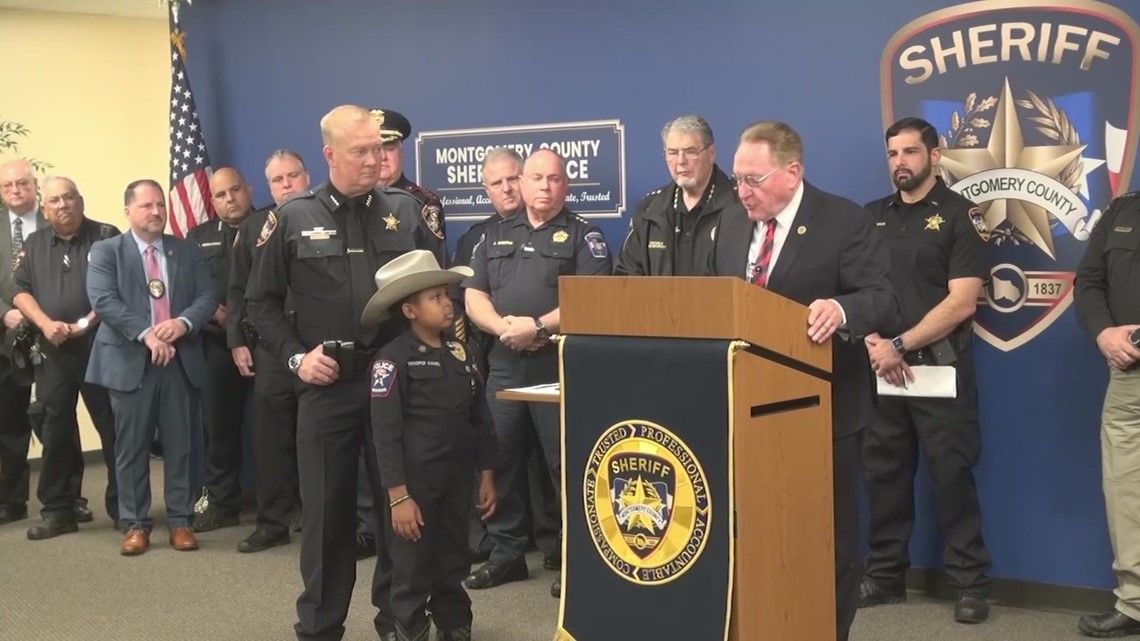 After taking 25 new oaths, DJ passed his milestone by becoming an honorary member of 100 law enforcement agencies. But it does not stop there.

The 10-year-old is battling terminal brain and spine cancer and he hit a monumental milestone on Monday.

DJ told his father, Theodis Daniel, that he wanted to be sworn in by 100 law enforcement agencies. With 25 new oaths on Monday, he surpassed his goal.

“Does that mean I just took your job?” DJ asked HISD Police Chief Pedro Lopez Jr. during the swearing-in ceremony.

He knows he’s not quite their size.

“We’re almost the same size, but I’m only around your neck,” DJ told another officer.

What he lacks in size, DJ makes up for in heart.

Wearing his constable cap and chest beaming with badges, DJ takes stock of his new stash, just moments after accepting his new assignments.

Life at work was, at first, a bit of a shock.

“DJ 100 showing up for work,” Devarjaye said on the radio as he sat in a police cruiser.

“Montgomery County communications to all units, DJ 100 is connected and ready to work,” the dispatcher replied.

“Here we are. We’re at work buddy. Are you ready to leave?” the officer asked DJ.

” Yes sir ! But wait, where are all the women? DJ asked the officer.

By cracking jokes and eating cupcakes, DJ will fight crime and cancer together.

He has already stolen our hearts.

“I told him, I told him, you know it’s not going to end. This love and support, you have years of it,” Theodis Daniel said.

Well, he’s not even close to being finished. Theodis said there are now more than 400 out-of-state agencies they plan to visit in the coming weeks.