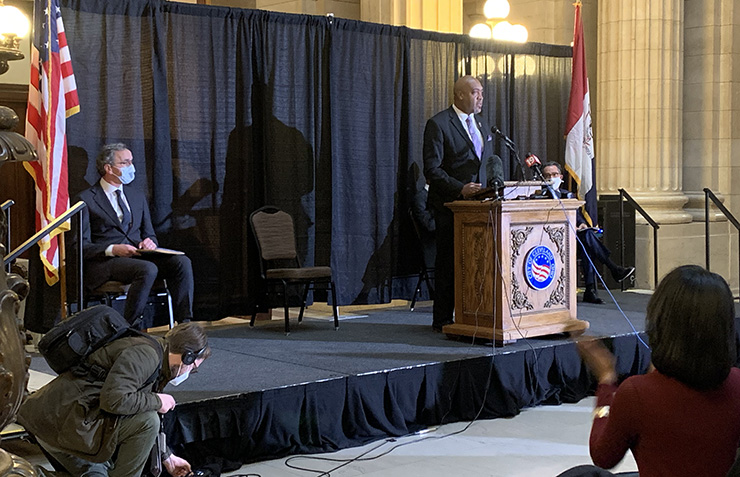 Cleveland (Thursday, January 13, 2022) – Today, Mayor Justin Bibb, Chairman of the Board Blaine A. Griffin, CEO and President of the Cleveland Clinic, Tom Mihaljevic, MD, and August Napoli, President and CEO of United Way of Greater Cleveland and member of the steering committee of the Lead Safe Coalition made a major funding announcement to ensure Cleveland homes are lead-free.

In July 2019, the Cleveland City Council passed the Lead Safe Certification Act to address lead poisoning in children and Cleveland’s aging housing stock. Now a national model, the law requires all residential rental units built before 1978 to be proactively certified as lead-safe by March 1, 2023.

The Lead Safe Cleveland Coalition is a public-private partnership with over 500 members representing more than 120 organizations with the same common goal: to ensure that no child is poisoned by lead. Through its Lead Safe Home Fund, the Coalition provides homeowners with loans, grants and incentives to secure lead properties and help them obtain the necessary certificates. They also train residents and others to inspect and remove lead from homes. The Lead Safe Home Fund assists, educates and engages families, homeowners and landlords through the Lead Safe Resource Center.

To date, the coalition has raised approximately $47.3 million for the Lead Safe Home Fund. Today’s announcement by the City and Clinic of Cleveland will bring the Fund to approximately $115 million, enough funding to ensure that all rental homes built before 1978 are lead-safe, as well as expand its work to deal more quickly, completely and definitively with the impact of lead. poisoning in Cleveland. The additional funding will now allow the Coalition to reach homeowners more deeply, help families facing displacement due to lead poisoning, create a national lead-free childcare model, improve lead screening and testing rates, train additional lead-free workers, and address other health issues. concerns about Cleveland’s housing stock.

When the legislation was passed, Council Speaker Griffin noted that it would have to be a community effort and that the city of Cleveland could not do it alone. And unfortunately, the pandemic has impacted efforts, particularly landlords and renters, to ensure all rental homes have lead safe certificates by 2023. With a major injection of funding, the effort will be intensified and expanded.

“My conversations with Dr. Mihaljevic began when he came to Cleveland to run the clinic,” Advisor Griffin said. “He understood what the clinic meant to the Fairfax neighborhood and he understood how lead poisoned children bring these neurological impairments into adulthood.”

Nearly 90% of Cleveland’s homes were built before 1978, the year residential lead paint was banned. Lead poisoning is a public health crisis with a housing solution. That’s why the city, Cuyahoga County, the State of Ohio, foundations, hospitals, private sector companies and more have contributed to the Lead Safe Home Fund.

“United Way and the entire Lead Safe Cleveland Coalition have done a wonderful job of making Cleveland rentals safe and the city has supported the work of the coalition. I’m proud that we’re doing more to support it,” Board Chairman Griffin said. “I cannot thank the Cleveland Clinic enough for the significant funding they provide. Being able to provide additional support to landlords is vital for the city and will help address the issue of housing instability. Funding will be transformational. Now the hard work begins.

In becoming President and CEO of Cleveland Clinic in 2017, Tom Mihaljevic, MD, pledged that Cleveland Clinic would do its part to create healthy communities. In 2022, the health system makes the prevention of lead poisoning its first community priority.

“This effort is essential because prevention is the only effective approach. There is no cure and no way to reverse the damage caused by lead poisoning once it is done,” said Dr. Mihaljevic. “I want Cleveland to be safe for all children, and I know that’s a problem we can solve. Our communities can only be safe and healthy when every person has the opportunity to live in a safe and healthy home.

On behalf of the Coalition, United Way of Greater Cleveland will serve as steward for Cleveland Clinic’s investment in the Lead Safe Home Fund. The coalition will also provide an annual report sharing progress toward building a safe Cleveland.

“Every day, four children in Cleveland are poisoned by lead, robbing them of the ability to reach their full potential,” said Napoli, “United Way of Greater Cleveland knows that the factors that keep people in poverty include the access to affordable, stable and secure housing.” He continues, “As a trusted partner, we are honored to manage the Cleveland Clinic’s historic investment in the community. It is a remarkable example of the power of collaboration between government, business and community leaders and demonstrates what can happen when a community comes together to solve problems that were once considered insurmountable.