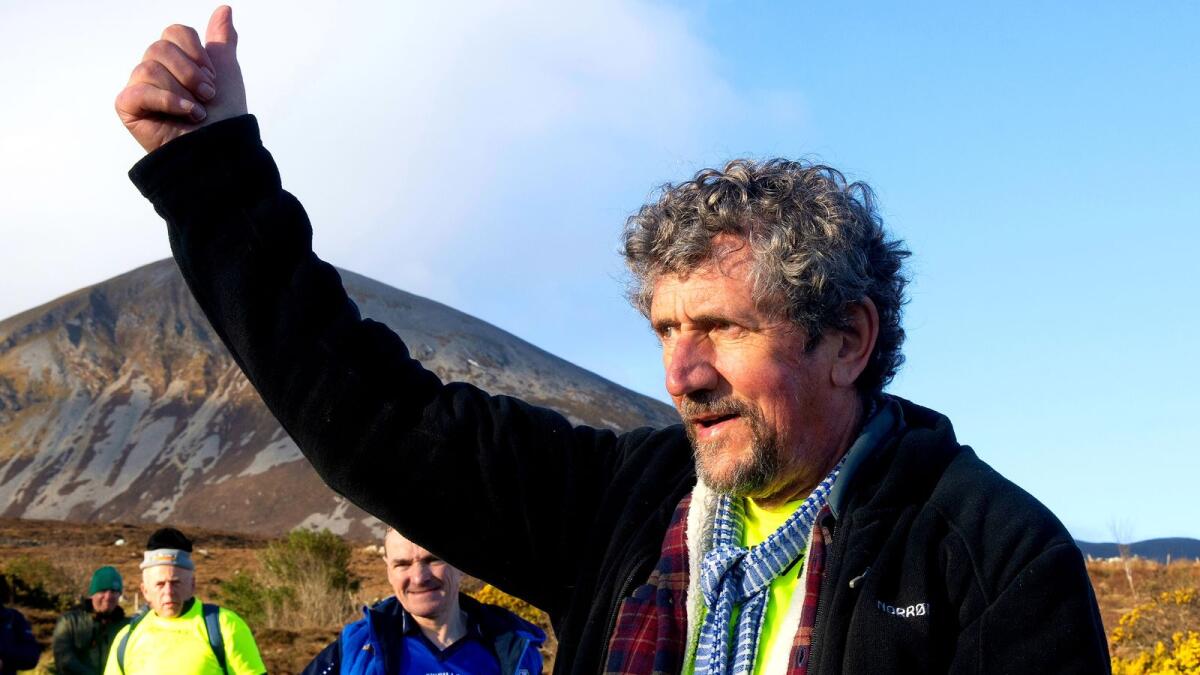 He achieved his goal of climbing the 764-meter-high Mayo Mountain to the west, a task he set for himself after being diagnosed with motor neurone disease last October.

Since revealing his ambition on the Late Late Show last December, he, his family and friends have founded the Climb with Challenge event which, at the time of writing, has raised over 1, 5 million euros for the two charities closest to his heart, The Irish Motor Neurone Disease Association and Pieta House.

Accompanied by his wife Claire and several of his best friends, he reached the summit of the Holy Mountain around 12:30 p.m. amid great scenes of joy and celebration.

Daniel said when Charlie’s illness is taken into account, what he has achieved is nothing short of remarkable and an inspiration to everyone.

Charlie lit five candles at the top in honor of his great friend Vicky Phelan, for anyone with a terminal illness, those who find themselves in a dark place and climb their own mountains every day, anyone who has helped to fight against the Covid pandemic since 2020 and the Ukrainian people.

The national flag of Ukraine and the tricolor, with the words “Climb with Charlie” written on it, fluttered side by side atop the mountain.

Charlie and Claire visited St. Patrick’s Chapel for silent prayer. A candle was lit on the altar in their honor.

Members of the Clew Bay Pipe Band entertained the general public at the top of the mountain with Matt Molloy of the Chieftains.

A tremendous sense of friendship and community spirit marked the solemn occasion which was broadcast live around the world by Midwest Radio and RTÉ.

It is estimated that over 20,000 people joined Charlie on the Reek in good weather, barring a short downpour or two.

Vicky Phelan got in touch with Charlie via a video link.

Mayo TD Alan Dillon was delighted to climb the mountain in support of this wonderful event and he met fellow Dáil Éireann Tipperary Labor Party TD Alan Kelly along the way.

In a recorded message, Charlie thanked everyone who made the event possible.

He said: “What happened today is a tribute to the tens and thousands of people around the world who have reached out in friendship to climb with me.

“Last October, when I was diagnosed with a terminal illness, it was a devastating moment for me, my wife Claire and my family.

“But something incredible has happened since then. I mean that from the bottom of my heart when I say something spiritual has moved me forward.

“Yes, I had a crazy idea when, off the top of my head, I told Ryan Tubridy that I wanted to climb Croagh Patrick.

“Now only people have joined us at Croagh Patrick, but there have been 150 climbs across Ireland, America, Canada, Dubai, Australia and the UK.

“My former RTÉ colleague Jim Fahy, Tuam, was going to climb with me as he knew this mountain so well, but sadly passed away earlier this year.

“The support I’ve received has uplifted me in a way I can’t express in words.

“The event wasn’t just about me, it was about everyone with a terminal illness. Remember, we never know what’s coming our way.

“I have no idea how long I will survive.

“Every moment I’m around, I’ll reach out the hand of friendship.

“As a journalist for 40 years, I have repeatedly encountered the generosity of spirit of the Irish people.

“But the level of support I have received over the past few months has stunned me beyond belief.

“I received hundreds and hundreds of letters of support for the whole country. All of these people are in my thoughts today.

“Even though I cry a lot because of my condition, it is thanks to the kindness shown to me on a daily basis.

“I’ve made some amazing new friends over the past few months.

“I was touched with incredible kindness by everyone who joined me on the Reek today.”

Charlie thanked all the volunteers who came aboard to help his event, including the An Garda Siochana, the Irish Defense Forces, the Mayo Mountain Rescue Team and the Order of Malta from Westport.

He is delighted that two very worthy causes benefit from the money raised.

Charlie has been tracked by TV crews along the route and special programs will air over the next few weeks, including one by iTVMayo.