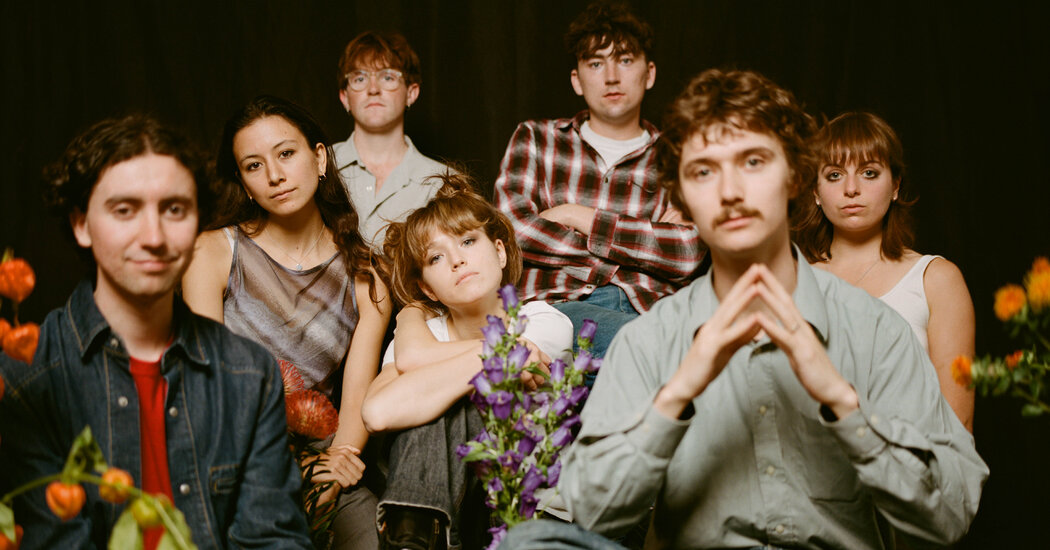 Electric guitars, spiky or smoking, largely defined the band’s 2021 debut album, “For the First Time”; Reminiscent of Slint and the Fall post-punk, Wood sang through many songs. On “Ants From Up There”, he generally leaned towards melody, while the band played with chamber pop and more pastoral sounds. It recalls guitar distortion and drum beats and brings acoustic instruments to the fore; it evokes folk-rock, lounge songs and waltzes. New songs are always laments and puzzles, just quieter ones (at least most of the time).

“Chaos Space Marine” opens with something like a traditional fiddle tune, pausing for individual player flourishes: trills, plinks, hoots, fast runs. Wood sings, dramatically but obliquely, about war, sailing, “becoming a worm” and coming home. The band could be a pit orchestra for a surreal operetta, dropping into a majestic halftime for a finale that ends with Wood declaiming, “Billie Eilish style/Concorde will fly/Ignore the hole I dug again.”

These verbal nuggets return, just as enigmatically, in other songs on the album. An abject love song, “Haldern”, begins with “Ignore the hole I’ve dug again” and continues, through undulating minimalist patterns, a heartbreaking crescendo and a final, shattering clearing, to praise “the only one I’ve known / Who broke the world so quietly. “There’s a waltz called “Concorde” that addresses someone named Concorde as a lifelong companion, lover, or apparition. And the album’s closest, “Basketball Shoes,” opens with Wood singing, “Concorde flies into my room / Tears the house to shreds.”

Extending beyond 12 minutes, “Basketball Shoe” moves through elegy, march, near-jig, near-still, giant unisons and a finale that’s equal parts triumph and despair; it also fits into the musical motif that started the album in “Intro”. Throughout “Ants From Up Here” and throughout each song, Black Country, New Road tests and reinvents itself, creating music that sounds both complex and precarious. How insecure was unclear until Wood left the band.

Black country, new road
“The Ants Up There”
(Ninja Melody)

As Challenger Banks grow, lenders should be nervous