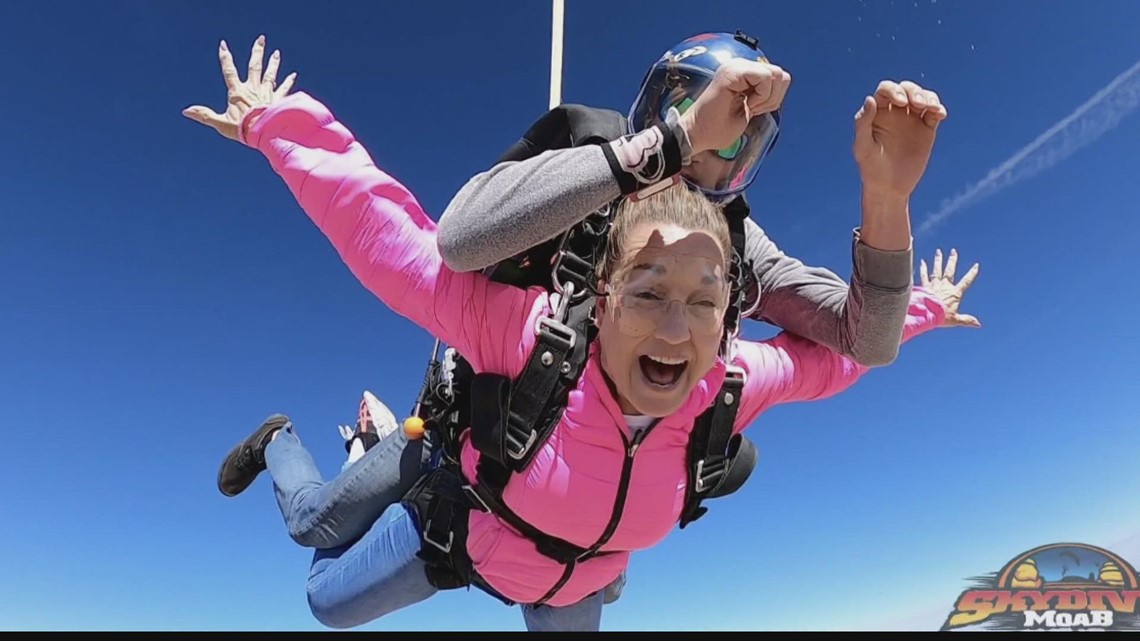 Theresa Candelaria, 60, knew she had a lot to live for when she was diagnosed with cancer. Now that she is cancer free, she celebrated her birthday by skydiving in Utah.

PAGE, Ariz. — Theresa Candelaria has overcome cancer. Then it was time to conquer something else.

“There’s a bravery in me now that I can accomplish and do whatever I want,” said Theresa, who lives in Page, Arizona.

With this newfound bravery, she decided to jump out of a plane in Moab, Utah.

“I was really fearless. I was just like, let’s do this. I’m ready,” Theresa said.

She wasn’t always so bold, but after being diagnosed with breast cancer in January, her whole life changed.

After noticing changes in her body, she went to the doctor for a mammogram. The mammogram went well. But Theresa still had her doubts, so she went to see a Banner Health Imaging specialist for an ultrasound.

This ultrasound showed she had stage 2 breast cancer.

From there, she decided to have a double mastectomy. Her husband, Ted Candelaria, was by her side the whole time.

“I couldn’t believe how strong she was mentally to get through this,” Ted said.

In April, Theresa was declared cancer free with a new outlook on life. She jumped with her daughter and dropped her late mother’s ashes into the air.

“Landing to have my daughter there, my grandchildren there, my husband there and knowing that my mom was there with me too was that so it was just pure bliss,” Theresa said.

Keep up to date with the latest news and stories on the 12 News YouTube channel. Subscribe today.