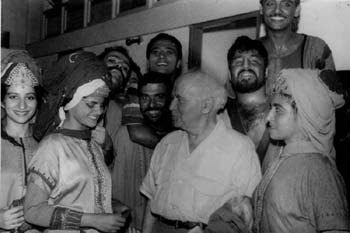 After 37 years of teaching Israeli dance in San Diego, Yoni was celebrated with two events. After her final dance session at the Champion Ballroom on September 29, the large crowd of attendees gathered in the parking lot to toast their beloved instructor and give them a farewell gift, a necklace bearing the words ” Never miss a chance to dance. “

The following Sunday, in a private house, sixty people gathered from all areas where Yoni taught, to honor him once more.

Yoni was born in Rohovot, Israel, the fifth of eight Owami children. His parents immigrated from Yemen, his father, a tiler, works long hours to earn enough to feed his family, his mother, take care of the children and housework. Prior to her marriage, Yoni’s mother was chosen as Queen Esther for a Purim carnival in Tel Aviv and her photo hangs in the Library of Congress in Washington, DC Yoni inherited the glow and beauty of her mother .

Yoni’s elementary education was in a religious school for girls. His parents were very Orthodox. The next level of education was also in a girls-only school. It was only at the third level, high school, that she attended a mixed institution. During their recess, they played Israeli dance music. She liked this music and realized how much she loved to sing and dance.

Her older brother, Rehavia, recognized Yoni’s interest and talent and arranged for her to spend the next few years in a kibbutz, Maagan Michael, between Haifa and Hadera. A married couple took her under their wing as surrogate parents. The kibbutz sent her to Hadera for classical ballet lessons and she received instrumental instruction, first on the clarinet, then on the mandolin.

After more than three years on the kibbutz, Rehavia noticed an advertisement for the dance company INBAL and encouraged her sister to audition. Yoni was accepted and enrolled in intensive dance sessions in classical ballet with Anna Sokoloff and modern dance with a disciple of Martha Graham. She also took singing lessons. Within eight months, Yoni took his place as a professional member of the company, often filling solo roles as in the 1965 production of Bar Vered (Wild rose).

She remained in the INBAL Dance Company for seven years, touring the United States and Europe and participating in Hollywood film, The greatest story ever told with Charleston Heston. The dancers represented girls from the harem. They stayed filming in Hollywood for nine months, enough for Yoni to fall in love with Southern California.

While being a part of INBAL, Yoni has also participated in Israeli productions of musicals such as The king and I, hello Dolly and my beautiful lady.

Jonathan Karmon invited her to become his main soloist in his Israeli folk dance group, after seeing her perform with INBAL at the Allenby Theater in Tel Aviv. Yoni decided it was time for a change and joined Karmon’s troop. It featured some of Israel’s most famous singers such as Shoshana Damari and Yaffa Yarkoni, both of whom are now deceased.

In 1973, Karmon invited Aliza Kashi to sing in The Great Musical of Israel, which had a nine month hit on Broadway in New York City. Kashi brought his own drummer and it was this drummer that Yoni developed a relationship with. After the show aired, he returned to his job at resort hotels in the Catskill Mountains and she returned with him. Four years later, they were married. Yoni found work teaching fitness and ballroom dancing at the Concord Hotel. Yoni became certified by the Dance Educators of America, specializing in the Fred Astaire method of ballroom dancing. The couple had a daughter, Tiffany, who now lives with her family in Jerusalem, another reason Yoni is returning to her homeland.

After 13 years, Yoni divorced and decided to find work in Southern California. Not only did she remember her experience filming in Hollywood, but three of her siblings were living there then. She was hired as an exercise instructor at La Costa Spa. She also began teaching Israeli dance at the Irvine Jewish Community Center, where she worked for 34 years.

When she decided to leave La Costa Spa, she applied to teach ballroom dance at the Arthur Murray studio in the Hillcrest neighborhood of San Diego. The lovely owner, Chuck Caricato, trained her. Four years later, they were married. They not only had their dance in common, but both had daughters named Tiffany. Yoni quickly started teaching Israeli dance.

In San Diego, over a span of 37 years, Yoni developed a large following. Her dance sessions have moved from Caleope’s to the Infinity Ballroom, the Folk Dance Center, Temple Beth El, the Jewish Academy and, most recently, the Champion Ballroom. From an original class of seven, its sessions grew to over 70 participants each evening.

When Yoni lost Chuck in 2019, she began to think about retiring and returning to Israel. In her native country, she will join three of her siblings. She plans to reside in her native Rehovoth, where her beloved brother, Rehavia once again lives.

She will be sadly missed in San Diego. As one of her devoted fans, Shira Wiseman, once described it: â€œYoni is full of a radiant personality, fabulous dancing ability, and patient and clear teaching; she is the icon of Israeli folk dance.

*
Eileen Wingard, former violinist with the San Diego Symphony Orchestra, is a freelance writer specializing in arts coverage. She can be contacted via [email protected]